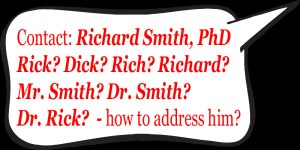 How about the person’s very identity?  Self-image, sense of self-worth.  I won’t bore you by repeating what you’ve likely already heard often: a person’s favorite word is their name.  So you know it, which means that you also know that much is riding on getting a person’s name right.  Get it correct from the start, wait! – but only if you want positive feelings towards you and your message.  Screw up the name even just  a little and a subtle ick feeling is created.  As their strongest source of identity it’s just basic respect for the person to get their name right.

Some people use this name importance knowledge to assume a closeness to the person that’s not real.  Just because you call me by my name does not mean we’re besties.  In fact, it annoys me when you overuse my name over and over again, like you think I want to hear it repeatedly, when I know that you’re just trying to beat this technique to death.  Not working.

So what is an internet writer supposed to do about this whole name thing anyway?  How do you know if Robert prefers Rob, Bob, Robbie, Bobby, or full on Robert?  Answer is: you don’t.  And online, you can’t ask, unless you call the office in advance and hear what the voicemail identifies as. Or better yet, get the referral, then you know the preferred buddy name.

A dead giveaway that someone doesn’t really know you is when you have an unusual name and that name gets butchered by strangers.  I named our oldest daughter Kelani and we call her Kelly or Kel, but strangers remain at a distance because they stumble on addressing her.  Hey, who said you had permission to assume a first name basis anyway?

Actually the internet did.   By definition the internet is an informal medium, so first names are assumed as pretty standard.  While addressing a CEO as “Jim” instead of “Mr. Johnson” may feel uncomfortable, especially in person, still if that’s the name he is listed by, you have tacit permission to use it.  (i.e. in the About the Leadership Team section of the website it reads: “CEO Jim Johnson welcomes clients and customers contact him directly.”)  But if you don’t have permission to use a first name and are contacting him blind, you should defer to the respectful position of the title. (i.e. “CEO James Johnson” gives no permission for a “Hi, Jim” or a “Hey, Jimbo” email!)

So how does the name thing work in business with contacting a contemporary or lateral colleague that you’ve never met?  Again the informality of the internet dictates that it’s fine to use their first name, without permission.  Permission is implied and “Mr” is too stiff for the informal internet.  But typos in a name are not allowed.  Ever.  Is it Kathy? Kathie? Kathi? Kate? Or Cate? Ya gotta check and get it right – show that you cared enough to make the extra effort.  If you do, it may go unnoticed, but if you don’t take the step to verify the exact spelling of their name, it may come back to bite you.  Especially when push comes to shove.  Never assume, even on common names.  Make absolutely sure, or it’s like a slap in the face.

When should you use the person’s name?  Using their names causes them to pay attention, it wakes up the brain.  There are 3 appropriate times to use their first name: in the salutation, at the close, and in the body contact with the caveat that only when making a very strong point.  Don’t use their name inappropriately or you risk being that annoying guy.  Use their name sparingly, to best effect; but do indeed use it and do spell it right!  What a waste to use it unknowingly misspelled 3 times in the same correspondence and not know the damage that is inflicted.

Many programs today have name merge capabilities, so your name appears in several places in the email content, what I call robotic naming, because you know that no human hand wrote this “personal” piece to you.  Trying for unearned familiarity, instead achieves the opposite; it gives offense for being so blatantly impersonal.  Resist the urge and instead send emails that are truly personal in their unique content.  Or if it is a mass email that you must send, limit the name dropping to just the salutation.  Call it like it is.  Yes, we all like flattery, even when it’s obviously fake, but we don’t like being manipulated by robo-writing pretending to be human.  Not a smart move.

Next time the topic is: Watch your tone online – it’s real, it can be hard to predict, it’s interpreted in the reader’s mind, and it can make or break your written communication.

Comment on naming names in business communication?  Or don’t you want to be a name dropper?