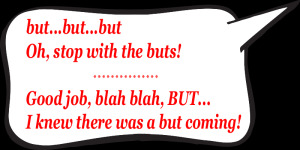 Do it literally; stop saying “but”.  Not so easy right?

So you’re telling someone in the office what a good job they just did on that project.  Wow, so impressive, such good effort put in that really showed, really gave 110%.  And what’s the response?  If it’s praise from a (usually demanding) superior to a subordinate, often the response from the subordinate is, “OK, but…?  I feel a “but” coming”.

Don’t think you’re demanding?  OK, a superior with ‘high standards’, really high standards, job keepingly high standards.  And that “but” just hangs there waiting for the proverbial other foot to drop.  The “but” foot of “…but if you had also remembered to include blah blah blah” And there it is – discounting all the good praise with a single, but powerful “but”.

“But” gains much of its power exactly because it is so overused to connote something negative, to offset the positive just expressed.  “But” is rarely used without the positive-moves-to-negative discounting pattern.  To unfortunate results.  And when “buts” are piled on top of “buts”, the cumulative results can be devastating to self-esteem, because “but” feels so accusatory to the receiver.  Drop the blaming by dropping the buts from your vocabulary.

So stop saying it.  Just stop.  I dare you to try, since you will find that when you focus on it, it’s really hard to go several sentences without a “but” creeping in there, even when you’re trying to refrain.

Replace every “but” with “and” and see the results.  “And” changes everything.   “And” is a team word, a joiner, a pleasant coupler of two positives.  And the funny thing is that changing “but” to “and” has little effect on the meaning, but has a huge effect on the feeling.  And that positive feeling rubs off on you, while getting your same meaning across.  Score!

“Wow, so impressive, such good effort put in that really showed, really gave 110%, and if you had also remembered to include blah blah blah”

See how different that feels?  No “but” and the tone shift immediately.  A small change delivers a noticeable shift, which builds on itself over time.

“But I can’t do it; old habits are just too hard to break.”  “But what about when I need to make a strong point, and that ‘but’ is warranted?”  “But how about the legitimate times when a negative needs to be pointed out and responsibility taken?”

Phooey, “and” replacing “but” still works in all cited instances:

Try kicking the “but” habit, you’ll like it.  And others will like you more because of it.

Next time the topic is: What’s in a NAME? – actually a lot, so be careful Mr. Smith …err…John…?