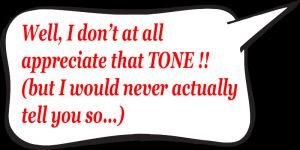 “While I appreciate the thought of sparing my money, I have no problem buying endless amounts for your children.”

What’s your interpretation of this message?  Is the tone sarcastic? Sincere? Simply matter-of-fact? Truthful? Spiteful?  The answer to that question depends somewhat on how well you know the person, but also largely on what mood you are in when you read it.  Good/OK mood, it’s taken more positively; bad/not so good mood, we’re reading negative connotations into the exact same words.

Have you been called out on the tone of an email you’ve sent… yet?  Or have you received an email that the tone was questionable, but being the polite person you are, you gave the person the benefit of the doubt?

Everyone has had one or both of these things happen to them.  And if you haven’t experienced the first one, it doesn’t mean you haven’t offended someone at one time or another.  It just means you are painfully unaware of others’ potential reactions to the written word.  And I hope you’re not that person, but hey, maybe you are.

Why does this tone problem happen?  Because word meaning relies heavily on tone, to get across intended nuance.  One word can have several meanings based on the tone that used.

In the live world of spoken words, tone carries 38% of the message.  The words themselves are only a measly 7%.  “But you SAID… why would you say something if you didn’t really mean it?”  Waa, waa, quit yer whining.

In the online world of digital communication tone is not on the page, but it doesn’t mean it’s not there.  The words still necessarily carry needed tone, except when words are written instead of spoken, the reader supplies the tone.  Which can be very different than what the writer intended.  Online, without the benefit of sound, tone is implied.  Sometimes with bad consequences.

Ann:   “What do you think about looking at that other option I suggested earlier?”

Ann to Sue: “That Barb is very curt and rather offensive.  I’m not sure we’re going to get along.”

This exchange actually happened and Ann wasn’t having a bad day.  She didn’t know Barb very well and there was a generational gap which didn’t help communication matters any.  Ann’s expectations and preconceived ideas were different from what she expected to receive from Barb.

Barb had no idea that Ann was offended by her brusque style and mistakenly thought she was giving good service.  Instead Ann had no intention of using Barb again, after this transaction ended.  Tone killed the relationship.  And Barb had no idea that the relationship was even on the rocks to be able to save it.  She never knew what went wrong or that anything was wrong in the first place.

So how do you guard against tone issues?  The best answer is always the simplest.  Simply wait to hit send, and re-read what you have written with the other person in mind.  How good is your relationship with the person?  Good enough to withstand someone’s unknown very bad day, like a day when their dog just died?  Or is this someone that you don’t know very well, in which case and putting on your kid gloves may be called for. Re-write anything that can possibly be taken the wrong way.  Then keep your fingers crossed for the reactions you couldn’t anticipate.

This is especially important the higher up your VIP scale the other person is.  And do it for every piece of writing with the VIPs (also called clients, bosses, and colleagues) in your life that you can’t risk offending.  This will offset the times that you send (email, text, im) something and miss catching the potentially offensive tone. (How could he have read that into what I said?  And why wouldn’t he have clarified with me, if that’s what he thought?  Because he won’t, that’s why.  You lose, period.)

Don’t take a chance on offending, because it takes at least 5 positives to offset every negative.  And no one has time to spend their life making up to other people.  There are no do-overs in the real world.  It’s best to get it right the first time.  Which just requires a few additional seconds of thinking before sending.  Could make all the difference.

Next time the topic is: Drop the big fancy words – or risk being dropped yourself.