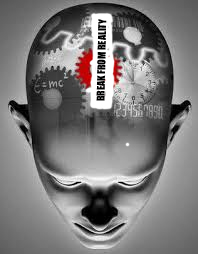 I just attended a funeral and ended up stuck in the corner with the crazy cousin who was talking nonsense.  You know who I mean; very family has one weirdo.  While he was going on and on about strange zombie ideas that no one in their right mind believes – disease is caused by water vibration that gets into the body and screws up homeostasis — I was standing there politely zoning out, since it was a funeral and I couldn’t leave or shout, Get out of my face you weird automaton before I catch whatever mental virus you have!

While I was tuning out the onslaught of gibberish, my mind had to do something, so with my background in communication I naturally began to seriously consider why crazy people are the way they are, which I realized is mainly due to survival – they are just looking for a way to get by mentally.  The world as we know it, for whatever reason, doesn’t make sense to them, so they create a world that does make sense.  Then they happily live in their own world.  They don’t know that everyone else thinks they are crazy, perhaps dangerously so depending on the degree of crazy.  They really don’t know that it’s hard to be around them because they make everyone so uncomfortable with their crazy talk.

We like the comfortably familiar.  Whenever people veer too far off the familiar path, either with bizarre physical behavior or nonsense words delivered with an intensity that is downright creepy, you just want to get the hell away from them.  Bizarre behavior and crazy talk doesn’t make for very good company as no one can stand to be around it.

The point is not to berate, laugh at, pity, or even to help this kind of crazy, as they don’t want help and won’t accept it.  So avoidance is the chosen path.  Maybe substitute the condescension with a dose of understanding; not easy to do.

Sadly, the entire extended family writes off this cousin socially as too uncomfortable to relate to.    And as if to underscore his degree of craziness, he passes out a business card that lists his position as “socialite” and “cultural icon” among other attributes on a long list – makes me cringe, embarrassed for him.  More like: eccentric antisocial oddity, but then what does it really matter?

I will note that anyone who spends 3 years in solitude to find themselves could hardly be thought of as liking other people enough to wear the label “socialite”.  But that’s just my opinion.  And let’s not miss mention of the title of “Sir” before his given name.  Delusions of grandeur aside, it would be laughable if it weren’t so sad.  Sad that this cousin is dead serious.  Not kidding at all, while looking and talking completely normally, with few words coming out of that ‘normal’ person that make any sense to anyone.

Where did things go wrong?  As a normal young child, where does craziness come from?  Everyone’s story is different, with difference life experiences that contribute to sending someone who is predisposed to bizarre behavior over the edge.

Is it ok to be crazy, as long as no one is getting hurt?  Certainly there’s no law against it, no matter how uncomfortable you make people.  Next question: do we need social acceptance – do we need to conform our actions according to social conventions?  Answer: yes and no – yes, we need others for emotional intimacy, since we are wired to seek out the company of others in a cooperative society.  But no, physically we don’t need others, as many hermits have proven.  The problem with crazies is that they choose to remain in society but they can’t figure out how to play by the rules.

A good communication rule to follow is: when someone says something that doesn’t make sense to you, instead of dismissing them, instead consider what must be true for them to have said it.  Hard to do with crazies, but it’s at the root of understanding, if you have a crazy that you care enough about to make the effort.  Your choice, since they don’t care what you do or think; they’re pretty happy.  And that’s probably enough.

Have any crazies effecting your life?  Comments welcomed below.