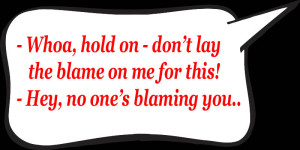 I was watching an episode of Seinfeld, the iconic show about nothing, repeatedly offering great commentary on communication. The focus of this episode was different characters feeling that someone was insinuating something that the person wasn’t intending to do. When Elaine buys George coffee, he is certain that her kind gesture was instead a snide insinuation that she makes more money than he does.  Jerry’s parents are certain that Jerry is insinuating that they need taking care of when he buys them a Cadillac that they don’t want.  Elaine is certain that Kramer is insinuating that he’s better than her.

Behind the humor is a situation that’s all too real as more often than not people personalize most things to their own perspective, real or imagined.

My daughter gave my husband and me a couple of smart phones a few years ago when they changed to i-phones.  The phones worked great until the other day when my husband’s phone somehow wiped itself clean.  It was no one’s fault, but when I mentioned her father’s misfortune, my daughter automatically leapt to defend (“phones worked fine when we gave them to you!”) even though I wasn’t insinuating any blame at all.

It’s a natural tendency to try to place blame for several reasons:

All of this is wasted brain energy, even if it is human nature to run through this self-protecting defensive blaming exercise.  In the interest of good relationships, we need to check it out and make sure that you know that I am not to blame for your misfortunes.  And even though I tell you that I don’t blame you, somehow you think that I might, so you rush to defend.

When you know about this very human blame/defend tendency, it helps communication to prepare for the blame reaction in advance.  Sure, you can front-load with, “Not that I’m blaming you, but did you know that the old phone you gave me awhile back broke down the other day, which was really annoying!” But let me stop you right there and back up the thinking with another thought.

Before you open your mouth, think instead, “What exactly is to be gained by saying what I’m about to say?  What do I want to come from this next exchange?”  If the answer is “nothing” and if what you’re about to say has the potential to hurt matters and not help, don’t say it.  Bite your tongue and move on in the conversation.

We don’t have to place blame (just a bad habit).  We don’t have to accept blame (falling on your sword; taking one for the team).  Not everything needs a blame assignment (and having someone or something to blame doesn’t change much).

When knowing who’s to blame doesn’t change what’s happened, what’s to be gained by knowing?  (Other than the brain’s open loop is closed and the brain is happy.)  Spare the hurt feelings.

Sounds easy, but it’s not that easy to actually do.  To wait 2 seconds before speaking and during that time, to consider the effect of your words on the other person and silently run through all their potential reactions to your words is a communication skill few have developed to use regularly.  But oh what a communication difference it would make to do so!

Thinking and speaking are habits, automatic forms of behavior; word patterns and thinking patterns that become ingrained after repeated use.  And automatic habits can be changed with effort, with belief in the change, and with practice.  Lots and lots of practice.  (And please don’t think that I’m insinuating that you’re a bad person or blaming you if you don’t change!)

Comment below with your own experience with blaming, placed or received, real or imagined.