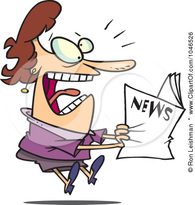 So here’s the situation – you have good news and bad news to deliver – which one do you tell first?

Or how about when the boss calls you into his office, you sit in the chair across from his big desk and he opens with, “Your work on the last project was good but…”   You brace yourself because you know that “but” is the signal that there is some disapproval to follow.  In fact, every time we hear the word “but” we know that nothing good is coming next.  In fact, hearing the word “but” erases the nice comment that preceded it.  Or did it?

What if you’re the one that has to deliver some negative feedback – how a do you do it?

All of these scenarios depend on the gender of the person hearing the bad news.  If it is a male, no problem to position either the good news first and the bad news last, or vice versa.  Males have the ability to hear both the good and the bad and will balance out one with the other.

Females, on the other hand, hear and retain what was said last.  If you tell her the good news first and the bad news last she will dwell on the bad news for much too long, and will have forgotten the good part soon after hearing the bad part.  So the best advice on dealing with delivering negative feedback to females is to sandwich the bad news in between two pieces of good news.  Tell her the good job she is doing with the specific example, indicate an area that needs improvement, then finish up with another example of some good but she is doing.  She will absorb the negative feedback and will be more motivated to change it, without feeling too bad about herself.

And with everybody, change the word “but” to “and” every time.  “Your work on the last project was good and…” whatever follows that the “and”, good or bad, will be heard differently and without the mental defenses going up.

At lunch today my daughter-in-law needed to deliver some bad news to her grandmother that she had lost a special item of clothing, which she accidentally left on a bus the previous day.  In this case there was no specific good news to offset the bad news, and her grandmother was gracious in her understanding and said, “it’s okay” – probably because was in mixed company and didn’t want to make a big deal about it.

So why didn’t the rule stated above apply here?  Well it might have applied since we don’t know how sad the item loss was to the grandmother, as she never said anything additionally out loud.  But what is true is that the weight of the importance of the bad news is a factor.  If it is less stressful bad news, offset by not wanting to make the granddaughter feel even worse over the situation, water under the dam and all that, then it passes.

But work performance tends to be an important and therefore high stress situation, especially when negative feedback is involved.  So in those high stress cases, absolutely apply the rule when dealing with females.  Your communication will be better because of it.

COMMUNICATION TAKEAWAY:  When delivering bad news to a male it doesn’t matter whether it’s positioned, as he weigh out the accuracy of the claim and deal with the information accordingly.  With females it’s a much different story.  If you give a negative information at the end, she will fret about it for a longer than she should, especially if it’s personal and comes from a source of high authority.  To offset this good feedback should be tacked onto the end, sandwiching the negative feedback in the middle.  The rule is: he remembers both, she remembers only the last.