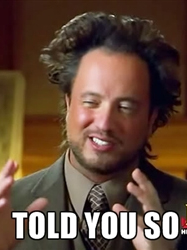 The TV show Will and Grace had a running skit on doing a little I-told-you-so- dance whenever one character was right and wanted to rub that fact in to another character. My large family was fairly competitive, likely due to my own competitive spirit plus the largeness of the family, which tends to encourage competition by definition. We would bet each other (“I bet you a dollar that I’m right”) with the stakes of the bet rising over time. The I-told-you-so-dance seemed like a good way to stop the betting, while still good-naturedly rubbing in the rightness without a hard cost attached. The real cost was playful humiliation, as the person who was wrong had to endure watching the person who was right enjoy performing the dance in front of them. At some point all it took was a slight hand wave (the beginning of the dance) to signify, “I told you so!”

It is a natural tendency to want to be right, part of the competitive spirit that guarantees survival in a competitive world. It’s also natural to dislike public humiliation, which hurts self-esteem if there are accompanying feelings of stupidity, mental ineptitude, or other negative traits involved (i.e. no one enjoys feeling like an idiot). What isn’t natural is the desire to rub in our rightness at the expense of another person’s wrongness. You can be quietly correct in your assessment without the need for anyone else to be correspondingly wrong. But in our competitive society we love to prove the pundits, the fictitious “them”, the universe wrong, when circumstances turn out to prove that against the odds we prevailed in our rightness!

When the rightness comes at the expense of the child’s wrongness this should no longer be considered enjoyable. Even a teenager that may look like an adult is still a developing child, without the full range of experience, knowledge, or brain development to know that building ego with “I told you so” is really an expression of low self-esteem. The person that feels the need to rub in their being right needs public acknowledgment to feel good about themselves.

COMMUNICATION TAKEAWAY: It is understandable when kids give in to their natural urge of competitiveness and enjoy being right, even rubbing it in when they have bested an elder. What isn’t helpful in the child’s development is when an adult engages in that same behavior at the child’s expense. Adults have so many more advantages over child that they should be right most of the time, refraining from rubbing it in with an “I told you so” comment in any form:

“Now what did I tell you just last week? I’m sorry to be always right, but once again I’m right.”

These lectures are rarely listened to because they sound like a broken record. There are many better ways to communicate your point without delving into an “I told you so” remark.