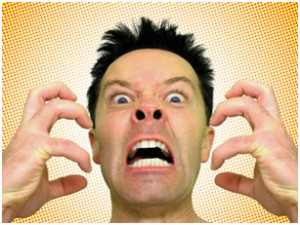 I saw this caption on a cartoon recently and thought how true it is.  As is the sister corollary: you can’t change anyone’s behavior except your own.  But sticking with the first one, why do we let certain people, including our children, drive us crazy? Why do we give them the keys, allow them to push our buttons, our very hottest buttons? Teens certainly know what their parents’ hot buttons are and they know how to use them, especially when battling to try to get their way. The slightest provocation in a “hot” area can quickly escalate into an anger situation, often with unfortunate results.  In anger we may say and do things that we later regret and end up doing harm to a perhaps already fractured relationship.

Maybe you have identified several things on the list, or maybe your list is different and includes the biggies (sex, drugs, breaking curfew, criminal activities) which is entirely valid – still, why do you let them have the keys to your mental happiness?  Why do you give them that control?  Nobody does anything to us that we don’t allow, perhaps unwillingly and certainly unconsciously, but still allow.  Much of the time we don’t recognize that we have the control over our own emotions, and so we don’t exercise the control that we don’t know we have.

But you say, “I don’t choose to get mad, I certainly don’t like it, but I just can’t help it… sometimes he just makes me so mad!”  Of course you don’t choose and don’t like to have your emotions flare up in anger, but you do have the control over those emotions. You can choose not to let anything you want bother you.  It’s hard to do it first and certainly requires practice, but it can be done, much to the benefit of your mental health.

“How exactly do I do that?”  Let’s take one potential hot button: repeatedly breaking curfew.  Let’s say that this one really drives you crazy, especially because it doesn’t seem to change. So you wait up, it gets late, and your adolescent finally strolls in the house, seemingly without a care in the world (which could be real, or could be just an act).  Your anger has been building while you’ve been waiting and it’s ready to explode the instant you hear the front door opening.  Instead, if you spend the waiting time rehearsing a calm approach, since you know this is a hot button for you and you are consciously practicing working to change it.  So you greet her calmly and say, “I’m glad to see you home safe, so now I no longer need to worry, and we can both go to bed.  However, we need to schedule some time tomorrow to discuss this breaking of curfew situation. I suggest we do it first thing in the morning at nine o’clock tomorrow, before the day gets too hectic.”  Get her agreement to the talk time, and then go to bed.  You have the ability to control your own hot buttons.  (And in the morning certainly conclude that discussion with proactive agreement on logical consequences for the next infraction, which you then must calmly, but firmly, enforce.)

COMMUNICATION TAKEAWAY:  It’s much too easy to let other people run our lives by controlling our emotions with their undue influence.  We give them this power over our emotions usually because we don’t know that we have the control we forget to exercise it. It’s so much easier to place the blame on someone else – “Look at what you made me do!”, “It’s your fault that I feel this way!”, “I hope you’re happy that you made me miserable” – when in reality no one can make you do or feel anything; you do it to yourself.  Yes, other people can influence you, especially when you care about them, but the ability to ‘make’ you feel bad you give to them. Staying in the driver’s seat and importantly knowing that you’re holding onto the keys is the first step in controlling your emotional health.