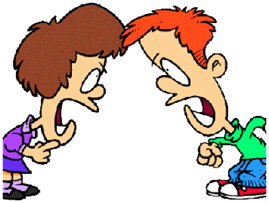 Busy working parents have limited time with their kids. Since they may not be around as much as they would like, when they are home they don’t want to ruin the precious hours by fighting.  Plus they are tired and often stressed from work.  It’s just so easier to let things slide and not be the ‘heavy’:  “I’m only home a little, so let’s not pick a fight.”  But from the child’s point of view, when largely absent parents are physically present in the house and are not parenting, they aren’t really there.  Quality of time versus seat time really makes a difference when parenting.

Parent should be willing to pick a fight when they need to and hold on firmly to the reins of authority, which can result in transforming teen defiance.  “You’re grounded” “So?” “You just added a week to it” “So?” “Keep it up and it will be another month.” “So?” “You got it. Your move.”  Where does the teen go from here, effectively boxed into a corner, and he knows that it’s all his fault.  He had the control and he let his defiance take over.  He won’t make that mistake again.

When holding your ground, know to expect emotionalism and testing from your teen, but remember not to get sucked in – remain calm – do not allow the emotionalism – the crying and gnashing of teeth, or the anger and name calling – to get to you.   By remaining calm it helps the teen to calm down.  By getting sucked in and replicating the behavior with your equally highly charged words and actions, the situation escalates, often out of control.  Now you have a volatile situation on your hands that can go nowhere good.  One side says or does something regrettable, and the side could be you, and now yet another battle rages.  And deep down the teen is scared because when the adult ‘loses’ it, no one is in control.  “Is mom going to remain in control and stay calm even when I’m feeling out of control, or is she going to get all upset?”  He needs you to maintain control since he knows that he can’t.

COMMUNICATION TAKEAWAY:  Instead of getting sucked in, remain calm while you continue to take charge and enforce boundaries.  Remember that there is no punishment that will make the teenager not feel rebellious angry – rebellion is just the natural response to being punished.   Teens are desperate for freedom, and punishment limits some facet of that freedom.  Of course they rail against the limitation.  It’s perfectly okay for kids to be angry with us – the parenting job is not to produce happy teens, but to produce well-adjusted responsible future adults.  And that is a process that is painful at times, requiring consistent diligence to do the job well.  Are you up for the challenge?  Hopefully you are because your teen is really counting on you to be.