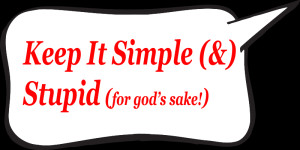 We are awash in bad, unclear, largely useless verbiage that at best befuddles the brain and at worse the resulting misdirection causes sizeable disasters.  Sometimes irreversible results.

Our movies are rift with miscommunication, which makes for dramatic and entertaining plotlines.  But in our real world lives, that kind of “entertainment” is best left at the movies.  Large scale personal drama causes frustration, anger, heartache that is very real and often unnecessary.  The desired course of action is always to avoid disaster, yet more often than not we instead court disaster by assuming the other person knows what we know when they don’t.  At least not fully.  And that critical gap can make you worlds apart.

“Be sure to bring the thingamajig with you when you come.”

“So where’s the thingamajig – and why did you bring a whatchamacallit?”

“Hey, you asked for a whatchamacallit”

“No, I distinctly asked for a thingamajig but you thought I meant a whatchamacallit” [I’m right, you’re wrong, nana nana boo boo] “and now it’s too late because you forgot the thingamajig which ruins everything!”  [ensuing drama about to unfold]

“Sorry, I thought you meant the whatchamacallit…”  [the victim, once again]

So why are we so bad at communicating?  If there is no language barrier, why can’t we just spit out the words, in the right way, and be perfectly understandable to the other person?  We know what to say, but somehow we don’t always do it.  And it doesn’t always catch up with us until it does.  Then it’s deadly.  Career deadly…relationship deadly…opportunity deadly…

We’ve all been there with our apologies (“I am SO very sorry; I thought you knew that’s what I meant…”) trailing off into thoughts of “shit, I blew that opportunity, and now he thinks I’m an idiot.  How did that happen…?”  Nothing to do now except apologize even more profusely, eat crow, and slink away.

The reason for our general ineptness is there is just so much going on; we’re just in so much of a rush most of the time trying to get everything done – yeah, yeah, keep telling yourself that.

Truth is: we communicate badly because it’s a habit we’ve fallen into.  An easy habit to just use the old word patterns that have worked fairly well in the past.  Habits continue because the brain doesn’t have to think and goes into automatic behavior mode.  And the few times we get tripped up is not enough to make us change, no matter how annoying or aggravating it may be to the other person.  To change mental habits takes effort.

By adopting the KISS principle we have a fighting chance at communicating clearly most of the time and avoiding unnecessary miscommunication.  Keep (consistently) It (all your communication, even the small stuff) Simple (no big words that could be misunderstood) and Stupid (no complex ideas without proper clarifying, then, importantly, check out loud with the other person for their full understanding).  And if you want to add another S on the end, it would be for Sweet (be nice!  Don’t make the person feel stupid or like a simpleton, just a quick “am I explaining myself clearly?” puts the burden on you.)

Occam’s razor is a principle that summarily states: the simple solution is often the best answer.  It is used in problem solving.  And isn’t much of communication about solving problems?

Wise men both.  KISS me, KISS others, KISS the world – today and forever..

Next time the topic is: PLAYING FAVORITES – Good idea or bad?  Can you even help it?