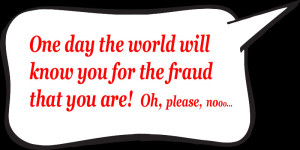 I’m good at what I do.  “Oh, no you’re not,” whispers that little voice in your head, “and someday someone’s going to you find out and expose you for the fraud that you really are…”

“No one’s going to pay you money for that work… you’ve just been lucky up to this point that you’ve gotten away with fooling people for so long.”  That negative voice pipes up once again.

“Fake it ‘til you make it, and someday it will become real” but that day is not today.  Oh the doubts that someday will ever come, and when it does will you recognize it?

Self-communication is a huge part of self-confidence, self-esteem and self-improvement – but somehow we forget that we can control the self-communication process.  It is not predetermined that negativity, which has at best held back and at worse ruined many lives, must be the only course of action.  You have the control of that little self-defeating voice, of all your thoughts, of ultimately the future you create for yourself – if only you will take command and exercise that control.

“You don’t deserve it.”  “You could have worked much harder than you did.”  “You put in your best effort, but your best is just not good enough, so you will likely fail.”  “If you do succeed, it’s just luck, and the next time you will be caught for not measuring up.”

The Fraud Syndrome, the self-doubting happens to all of us at one time or another, and is especially prevalent among entrepreneurs, who put themselves and their creations out there every day.  Outwardly confident people experience it, arrogance masks it, extroverts suffer as much as introverts.

So why is this the case?  Why do we self-sabotage our efforts?  Sometimes those efforts are for something that we really deeply desire, and then the self-recriminating thoughts can strike at the worst.

Adults are skeptical by nature.  Oh, we started out as true believers (Santa Claus! the Tooth Fairy! Tinkerbell!) but then the reality of a harsh world cured us of our innocence (“you dumb bell – you don’t really believe in that made up stuff do you?”)  Who wants to look like a gullible idiot in a smart world that is trying to laugh at us?  So a little questioning voice develops that is constantly on red alert to avoid embarrassment, “is it for real?”  When that voice turns on our own abilities, a Fraud Syndrome is born.

We hate to be wrong (in neural terms this is the concept of consistency) – once we take a stand on something publically, we maintain our ‘rightness’ for our opinion, unless new evidence gives us an easy out.  So when we put ourselves out there as an expert, there is a strong feeling that it would be really embarrassing to be wrong.  So we beat ourselves up, thinking if I’m wrong, I’m going to discover it myself before someone else can notice it.  The only problem here is that we don’t realize that others want to believe in us and aren’t looking for us to fail.

Another contributing factor is fear of success.  Yes, there is a fear of doing well and all the changes that can come from success.  It doesn’t happen to everyone, but a Fraud Syndrome that is due to a fear of success is a survival mechanism the brain creates to protect us. If we tell ourselves we’re a fraud and are going to be discovered, then likely we will eventually fail (self-fulfilling reality) and then nothing will change.  Problem solved; no success equals maintaining homeostasis.  Yay, L

How do we change things and eliminate the self-sabotaging self-communication of the Fraud Syndrome?

The first step is to acknowledge that you have the power over yourself, power over the thoughts running in your head, power over your behavior that results from those thoughts – action or inaction.  Know them for what they are – just a bad habit, a negative thinking loop that you can turn off.

The next step is to listen for negative words, and stop them when they begin.  Refuse to let them run in your head.  Negative thinking patterns are old tapes that run without abandon and need to be deprogrammed.  Banish every thought that starts with, “you will potentially fail…” that have little merit.

Finally, exercise your power over your thoughts by replacing critical thoughts with positive thoughts.  Acknowledging that you have the power over yourself is not enough, and fairly useless if you don’t use it.  Make those positive thoughts specific (not: you’re great, you’re smart, you’re nice; instead: you’re a good organizer, you’re really good at problem solving, you’re good at putting people at ease when they’re upset).  Give yourself all the credit you deserve.  Put that little voice to work with new words that help, not hurt you.

You’re really important to your psyche.  Your self-communication, the words that you use in your private thoughts, go a long way to contributing to your ability to accomplish.  Be kind to yourself as only you can.  Charity really does begin at home.

Next time the topic is: The most important question to ask yourself– if you want to be the kind of person who lives a life without regrets.