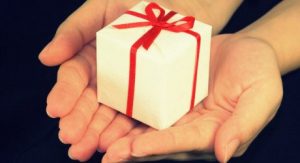 Thad had a great idea for his wife’s First Mother’s Day – a t-shirt with the baby’s name and picture on it.  He was so pleased with himself for thinking of such a perfect gift, which she was sure to love.  He even ran it by his sister-in-law to verify, since she knew her sister well.  Carefully he selected the baby’s picture to put onto a large red heart and sent away to have the t-shirt made up, in plenty of time before the date.  He wasn’t great at this, since DIY was his wife’s specialty as a graphic designer, but felt that he did a decent job.  He excitedly waited for Sunday to arrive to present it to her.

The reaction to his gift was less than stellar.  Thad’s wife wondered when exactly she would wear it, as t-shirts weren’t her typical style.  Maybe when she was younger, but that interest had long faded.  What was he thinking?

Why did this sweet intentioned but wrong effort go sideways?  And what’s in store for the many gifting years ahead?

Gift giving can be especially difficult because there’s a lot going on at the same time.  With a carefully selected gift, we are trying to communicate 1) how much we care for the person, indicated by the amount of money spent or the amount of time/thought spent creating; 2) how well we know the person, well enough to know their strong loves and unique taste level; and 3) how important the relationship is to us, that we spend time torturing over the perfect gift.  When we fail, it feels like a failure on all counts.

So we check in (#3), “Are you sure you like it, because I can bring it back and you can change it for something else”.  Or we reinforce #2, “Ha, I KNEW you would like it – it just screams YOU!”  Or we CYA (#1), “I didn’t know what to get you, since you have everything, plus it’s really the thought that counts, right?”

The polite person, knowing that the other person’s intention is good, quietly demurs to all gifts received with an “Oh, thank you so much” then tucks unwanted gifts into the re-gifting pile, which usually end up not being re-gifted at all, but instead donated or garage-saled.

But with spouses, this is not easily done because unwanted gifts can’t be hidden away, nor should the disappointment that their spouse really doesn’t know them to the degree that they should. So what does Thad do, a young husband who is trying, but doesn’t really know how to maneuver this minefield?

As always, clear communication directly with the source is the answer.

– Active listening is called for in all relationships – which calls for thinking about the words someone says, and putting the words into proper context.  When she says she likes ‘I heart’ t-shirts, how long ago was that said?  Is it still true today?  Some people outgrow some things, other people never outgrow some things – which type is this person, for this item?  Some people are flattered that you remember something they mentioned ages ago and acted on it.  Other people only made the comment in passing and are aghast that you would act on it much later.

– When in doubt, ask!  What, and ruin the surprise? – is the surprise factor worth the risk of wasting good money on an unwanted surprise?  Surprises aren’t always good – like the surprise of receiving something that you won’t use and can’t be returned…

– If you don’t want to directly ask, indirectly ask: “Remember when you used to like ‘I heart’ t-shirts – do you still like them, because I don’t see you wearing them much lately?”  Get clearance, not from the SIL, but from the person themselves, before executing your plan.  An answer like, “Yeah, no, I outgrew that phase” tells you all you need to know, before you go out and make a large gaff.  Also, the fact that you don’t see the item being worn at all should be a big clue on current taste – closely observe and pay attention to really get to know the person.

– Remember that just because you like something, and the other person shares much along the same taste lines, no one is completely the same as another; you aren’t gifting to your taste, but to the other person.  Plus people change, their taste can change. You may have been alike in your tastes once, but that may not hold forever. Keeping up with the changes is really knowing the person, through the years.

– What is the person’s views towards resources?  Time and money are no object? – if so, then go right ahead, splurge and waste away, to no consequence.  More practical-minded? – then make sure you’re on target, or ‘measure twice, cut once’ as the old adage advises.

– Is this person internal (authority comes from within) or external (authority source is outside of self)?  Internals – about 40% of the general population – know what they want and are very particular; externals (also about 40%) go with the flow and are easy to please, as other people’s opinions are important to them.  Check your gift closely with an internal; make certain they like it or you are risking a gifting fail.

The point of all gifting is to make the other person happy, to bring a smile, to have them feel positive towards you.  Those positive feelings are meant to deepen the relationship, strengthen the bond, communicate the level of caring and emotion you feel for the person – and hopefully have it reciprocated.

With all this weighing on the gift giving process, it’s a shame when good effort expended goes down the wrong road, making the next venture, and the next one after that, a long testy string of misses, if you don’t engage your communication tools.

Have a gifting mis-adventure of your own?