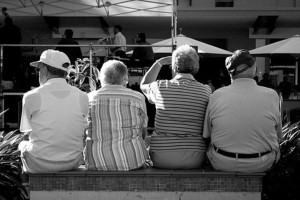 The senior citizens living today are made up of the 70-90 year old Matures and the 90+ GI Generation who fought to save Democracy.  The Greatest Generation, as appropriately lauded by Tom Brokaw, are way past their heyday, but hey! – what a heyday it was!  We owe much to the currently 70+ now senior citizens who fought in WW II, lived through the Depression, and built the US into a great nation of prosperity.  While we owe them our deep gratitude, instead the Silent Generation is under-appreciated and overlooked.

Gerald still lives in his own home, married to his sweetheart of 60 years, Hazel.  They raised 4 strapping sons in the house they still live in today, small by today’s standards, but plenty roomy for their taste, then and now.

Their standards are modest because Gerald and Hazel were savers their whole lives.  Never ones to spend foolishly, the Great Depression taught them the value of money, and what’s really important in life.  They are part of the Last innocent Generation.

Their values include respect for authority figures, the importance of doing the right thing, love of community, strong sense of duty, and civic volunteering.

The best way to communicate with elderly parents, neighbors, friends and family is by valuing experience and wisdom – yours as well as the longevity of the idea being endorsed (read: new ideas and anything too technical are intimidating and confusing).  The message being communicated must align with their basic values or it will never be embraced.

As we wind down the series on the generations, note that each generation is a reaction to the generation that came before (their parents) as well as being shaped by the specific economic times experienced during their formative years.

And the traits that the generations share are intact for their entire life.  Boomers will always spend and not turn into savers when they become the age of the Matures.  Gen Xers will always be practical and cautious and not become as optimistic about the future when they become the age of Boomers. Millennials will soon rule the world, looking for the fun and entertainment value in everything that they do, along with others to do it with.  They and Gen Z are the future, as we all embrace the beauty of change which is growth and progress.

60-yr old Steve has such a hard time talking with his 36-yr old daughter.  “Her views are so ridiculous; she says one thing but then acts a totally different way!” he has complained on more than one occasion.  The topic could be gun control, politics, or freedom of speech – on every topic they stand distant poles apart.  What’s to be done to bridge this communication gap?

Actually it’s Steve that needs to reframe his perspective, not necessarily changing his view to agree with her, but at least to admit that she has a right to her way of thinking.  The old maxim: different is not wrong, it’s just different, is very applicable.

If Steve were to give his daughter (a pragmatic Gen Xer) a chance to assert her opinion, maintaining respect for her point of view, they could converse more agreeably.  Instead each conversation is a torture, until eventually they stop conversing, each saying “I can’t talk to him! / She’s impossible to talk to!”

Knowledge about the other generation can help to bring about desired change.  Knowing that the Boomer (Steve) loves to be in control (due to the skepticism created by the Watergate era), can work to make him think that an idea was his by showing him supporting data of the opposing side.  And knowing that a Gen Xer (the daughter) is very pragmatic and practical, can be brought around by combining old ideas in new ways.

With understanding, the generations can communicate with each other well enough; understanding that the generation gaps are just a desire for independence and identity.  When recognized as such and both sides maintaining respect, any gap that wants to be closed can be bridged.