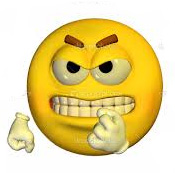 A threat is a solution that is delivered with an emphasis on the punishment that will be forthcoming if the solution is not implemented.  Threats produce the same kind of negative results that orders (refer to previous post) do.

How easy it is for the all-powerful parent to exert their power by threatening their fairly helpless child with some form of punishment if they don’t do as they’re told.

“If your grades don’t improve you will be grounded until they do!”

“Answer me right now or I will make you answer me!”

“I am sick of your room looking like a mess.  The next time I step in here if it’s not cleaned up I’m packing it all up and throwing everything you own into the trash!”

Much of the time the threats screamed by parents in anger are idle rants and just something to say to get a reaction; they don’t actually have a serious intention of following through with the threatened action.  But this is dangerous for a number of reasons.

For one thing, the child may initially believe the threat and then quickly learns that the parent can’t be taken at their word.  Once this lesson is learned, it can’t be unlearned, and the next threat is dismissed with, “Yeah, you don’t really mean that, since you say that stuff all the time, and nothing ever happens”.  Or “Go ahead, do it – I dare you!“.  Now the parent is stuck in a situation of their own making.

Or the parent feels compelled to follow through with the threat, to be true to their word, once they’ve taken a firm stand, and then does something that they later regret.

What is gained when all the child’s things are thrown out, as in the example above?  Not only is there the expense of re-buying or trying to salvage the items, but deep damage happens to the child when the attack is so personal.  The child’s identity is tied up with their possessions.

And often the initial point get lost in all the guff – was it to get them to clean their room?  There are so many better ways to communicate with children then issuing idle threats.