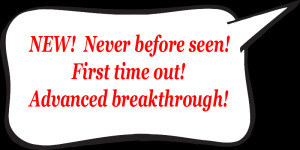 Oops! The week is almost over and I need to finish up this series of the 4 most powerful words, in any language, that research tells us rank highest in power and persuasiveness, with the last word: “New”. These words speak to our basic needs and interests as human beings, no matter our culture.  They are Mother Nature’s words and added to any headline gives it extra zing.

“New” gets power by tapping into our very human trait of repeatedly seeking out novelty. This trait served our Neanderthal ancestors well, as discovering new things brought new opportunities and potentially new resources, new food supplies.  There also lurked the potential danger of new threats, as with the good sometimes comes the bad; but that’s another discussion.  Their descendants – us! – found newness to be more of a help than a hindrance, and so the trait not only survived but flourished.

So we are hard-wired to pay attention to anything “new”, some to the point of addiction.  We get addicted to the ding of our computers telling us we have new email – oh, the novelty!  Hmmm…what’s in that new email I heard just arrived?  The novelty seeking brain just has to find out; the curiosity is overwhelming.  And so we stop what we’re doing to just take maybe a little tiny peek… maybe it’s something good, something we’ve been waiting for, some nice surprise just dying to be read.  This scenario repeats itself over and over again throughout the day; a pleasurable distraction or a compulsion that can’t be ignored?  The same can be said for surfing the ever changing internet, which can consume hours of time.

Strong attraction to novelty is at the heart of gambling addiction. The brain sees the flashing lights, the whirling sounds, the opportunity with every roll of the dice or crank of the slot machine for mega riches.  And somehow there is the belief that the gaming system is fair and nothing is rigged. Even if this were true, there is no pattern that exists for the determined brain to figure out, try though it might.

“New” in a headline is guaranteed to get attention because the word also taps into our psyche at another level. In addition to a strong attraction to novelty, many among us have competitive egos that crave being the first on the block with the newest version of whatever. We want to feel up with the times and not living under the proverbial rock. The newest item? – yeah, we know all about it; we’re cool.

So use “new” freely in your headlines to grab attention, as a proven powerful way – as long as it’s true of course.

Next time the topic is: the word “no” – we are trained from childhood to say no, almost automatically without giving it a lot of thought.