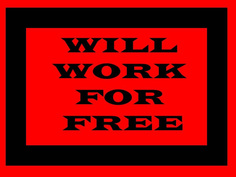 Most of us are fairly charitable and want to help out in the community, often “giving back” by volunteering our time and joining fraternal groups.  In fact, research shows that by nature people are kindhearted and want to be helpful; human babies will go above and beyond what chimp babies will do to help others out.  We are proven to be hard-wired to want to help other people – our very existence depends on a cooperative society for our continued survival.  We simply can’t get by (or it’s just too hard) on our own.

I have worked as a volunteer for several charitable groups over the years, while simultaneously working in the business world, largely in a managerial capacity in both arenas.  And what a world of difference there is in managing and communicating with paid versus unpaid help.

The volunteer was giving a presentation that was, unbeknown to her, totally not in keeping with the direction of the large organization.  I corrected her, gently but firmly – what else was I to do? – rather than let the misinformation continue unabated.  A higher ranking volunteer, who should have screened the presentation in advance but did not do so, was aghast at my correction and embarrassed for the first volunteer.  I asked, “Would you rather I have said nothing and let the wrong situation continue, simply to spare her feelings?”  She replied, “Yes.”  OMG, yes!  By all means – spare her feelings, at all costs – since she’s ‘only a volunteer’ and we can’t offend.  Never would that sentiment have flown in the business world!

Additionally, I asked if perhaps she felt more upset about letting the situation happen in the first place, by not screening the presentation as she should have done, and her response was, “I don’t think it’s possible to do what you suggest”, which was code for: “I don’t want to take any blame here.”  And why should she want cause to feel bad about her own volunteer experience, which would then no longer be fun?  And isn’t that really the bottom line – if volunteering in your spare time is not fun, why do it?

Sometimes the work of volunteering is really work – administering the details, providing the structure, the organization of the event – which someone has to do to make an idea into reality, and which others will rebuff against (but not volunteer to do the needed work themselves).  So there’s the rub.  When there is paid work, everyone knows the rules and the hierarchy.  When volunteering the organization is relatively flat and the rules aren’t hard and fast (it’s so not polite to yell at a volunteer).

When the volunteer work is just as serious as paid work in the benefits that result, then volunteering becomes serious business.  Sometimes it’s very big business, as with the Red Cross during a natural disaster.  And treating volunteers differently because they are ‘only volunteers’ can be extremely detrimental.

When my son traveled 3 hours (round trip) to Staten Island to help out with the cleanup of Hurricane Sandy, the volunteer organizers were too disorganized, probably due to being too nice to take charge of the situation (heavens, don’t want to appear rude) to get meaningful work done, which frustrates those that come to help.  Lots of unproductive waiting around after all the time spent getting there.  But because they are ‘only volunteers’ we give them lots of leeway on being accountable.  What good does it do to complain?

COMMUNICATION TAKEAWAY:  When communicating with others down the chain, unpaid staff must be treated with kid gloves.  Business standards simply don’t apply, for fear of offending the few volunteers still willing to put their hand up.  Ironically this method of communication also hurts the ranks, as the volunteers who really want to be productive are annoyed at wasting their time due to overstaffing and disorganization, and leave in the frustration of being underutilized.  This is such a shame, because the need is still great, but the lack of business standards of accountability can prevent much of the real work from happening.  We all perform better when there is some accountability in place – a trait that is sorely lacking in many volunteer situations.