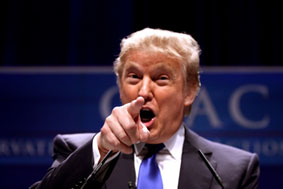 The Donald enjoys being in the limelight for many antics that nary a politician ahead of him would dare to do.  Because of his blunt tell-it-like-it-is personality, he has quite the bully reputation.

And like most bullies, The Donald doesn’t especially care whether he offends or whether he is actually liked.  Oh he certainly wants votes, he wants to be top in the polls, but that is a far cry from being liked, which he probably considers too soft for his rough ‘n tough image.

The classic bully gains popularity by dominating and controlling his peers (in the bully’s mind they are actually subordinates, as he thinks he has few peers).  He rises up to the top of the pack through aggression, which makes him popular but not necessarily well liked.

The political strategy Trump is using is an interesting, albeit unusual one, that none have tried before him.  He is not unintentionally making language errors or bothered by his asides being caught by the media. The fine-tuned barbs are calculated to land with maximum effectiveness. He does all this under the premise of letting his authenticity show through, even if it’s not a likable persona on display.  Why should he care, when it’s working so well?

Trump welcomes the opportunity to knock his rivals off kilter, which throws them for a loop.  The ensuing controversy is part of the plan to gain the attention he seeks.  This strategy certainly gets and keeps him in the headlines.

Just like a child who acts out to gain attention, negative attention is better than no attention at all.  Gaining attention is a basic need – we humans simply can’t be ignored.  We believe that we are all on this earth for a reason – to have some sort of impact gives life meaning; being ignored says that we don’t matter.

But putting politics aside, the real issue is BEING LIKABLE.  Most of us cringe at the thought of being actively disliked, which could lead to having fewer friends, or even being shunned.  The practice of group shunning is embraced noticeably by the Amish and it’s devastating.

To be cut off from all communication from the only people that you know and care about, to be treated as invisible is the epitome of loneliness.  We are such social creatures; few of us would choose to live alone.  Not just because of loneliness, we’re not built to live solitary lives. We need the cooperation of others for our survival, which makes us predisposed to be social.

In the world of communication, being likable is THE key ingredient in success.  Oh sure, you can be ‘successful’ by slaving away in a dungeon for years and emerging with an amazing new invention that will change the world, but there’s a one in bazillion chance of that actually happening.

In truth we live in the real world where people who are liked are trusted and are enjoyable company. We like being around people that we like, and choose their company over others, giving them our business more often than not. The likability factor has the greatest impact in determining business success, more important than experience and knowledge, when push comes to shove. Yeah I know that this shouldn’t be true, yet it is the reality.  Given the choice, we patronize people we like.

So why is Donald Trump’s bad boy strategy so successful?  Most of us have a distaste for the political process so it’s fun to see a maverick turning the tables on the establishment.  Trump becomes an unlikely underdog to root for, the outsider who is shaking up the old system.  His antics may please many fans, but no one really wants to act like him in their own behavior.

Far our part, let’s all be likable and pleasant in our personal communication, the best path to our own good success, and leave Donald Trump to his own amusement, which will likely end badly.