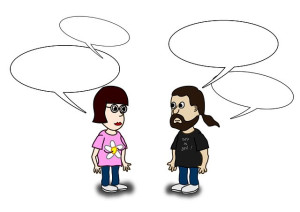 You would never know that deep down Jake is terribly shy.  He’s in sales for goodness sake, so how is that possible?  Oh, he’s more than capable to put in an order, and talking about the product when asked is easy enough for him to do, but left to his own devices he would rather lay on a bed of nails than attend a networking event.  What do you say exactly to people you don’t know?  A little this, a little that, a nervous laugh when the conversation lags, then a long stretch of silence before they leave for more affable company.  Beyond awkward, it’s painful.

Nancy has a similar problem.  An introvert, she hates attending the obligatory cocktail party with her husband, talking to other soccer moms in the bleachers, going to a workshop or a conference – socializing with a bunch of strangers she doesn’t know or care about is at best a waste of time, and at worse just torture. Sure, it’s good to get out, broaden your horizons and meet people, but it’s really not enjoyable.  Actually more like dreadful.  She doesn’t have Social Anxiety Disorder, but it’s still way out of her homebody comfort zone.

Then there’s Jerry.  He’s socially awkward, with no problem talking to anyone, but says all the wrong things.  People who know him, run the other way when they see him coming.  And those that don’t know him start looking for an exit shortly after he opens his mouth, as he jumps right in to the deep end of the pool, expounding on wild ideas that are hard to follow and make no sense.  He just doesn’t know he’s his own worst enemy in the conversation dept.

Jake, Nancy and Jerry have a problem with small talk.  The Making Small Talk tool is missing from their communication toolkit.   And they are not alone as many people find the practice awkward and unfulfilling, but small talk is an essential communication skill in modern culture.  It is the ice breaker, putting people at ease; the opening to future relationship opportunities.  Or merely to keep from being regarded as socially inept and hated, which can lead to social isolation, either self-imposed or forced exile.  And no one deep down wants that; we are wired to want, need, and desire social interaction.  So put your nerves aside and learn how to rock the small talk.

Plan on bringing out the small talk in 4 situations:

1) You don’t know the person well, meeting for the first time, and don’t want to come off as a creep (i.e. holiday parties, networking events) a potential prelude to go to ‘big talk’, should the relationship develop further

2) You don’t need to know the person well; it’s a chance unplanned meeting (i.e. waiting in a doctor’s office, bleacher-mates), and it’s nice to be polite and not totally wooden

3) You don’t want to know the person well, now or in the future, there’s no chemistry to take things beyond small talk, but you can’t hide under a rock so small talk is called for

4) You know the person, but are just too tired for a long conversation and just want to keep it light (and bellowing “Back off!” makes you look like a hormonal idiot)

OK, so that’s when to use it – got it! (and pretty common sense-y)  Now how about the ‘how’ – what needs to happen to get the job done well and right?

1) Mentally prepare your arsenal with a few light topics at the ready.  Current news events (apolitical), sports happenings (“How about those Pats?”), hobbies, travel, commenting on the weather is a usual fallback but including a short personal story twist is better than lacking one.  “I’m bracing for the coming cold weather with a ceramic heater that I found worked better last year than the standard blower heater.”

The key is prior forethought, not to be caught empty-brained.  Stay with a handful of easy neutral timely topics.

2) Be prepared with stock one line (not one word) answers to the standard questions that will likely come your way, answers that will start, not stop, the conversation.

“Where are you from?”  “I grew up in the South, where the customs are very different from here.”  “Really? What kind of differences?”  [conversation begins].

3) Ask open-ended, not closed-end questions, that move a conversation forward.

Open-ended: “What’s the most interesting part about what you do for work?”

Closed-ended: “Do you know the hostess well?”  “Not really.”

Open-ended: “So, how do you know the hostess?”

4) Use body language to enhance your words.

Give your full attention.

That’s all it takes to be a newly minted master of the Art of Small Talk.  Mainly it’s about preparation, since being unprepared leaves most people stumped and silent (and uncomfortable).

Now, Jedi Master, go out there to the next dreaded event with a (knowing) smile on your face.

(And still run from Jerry.)