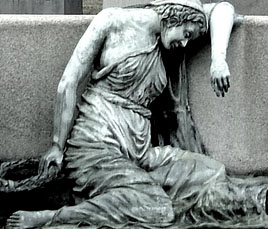 It was a sad Thanksgiving in our family, with my 64-year old sister-in-law dying much too soon.   It started with an assumed tweaked back from shoveling snow in Feb that kept getting worse instead of better.  That pain actually came from her hip where a large tumor was rapidly growing in the socket, pushing residual pain to her back.  By April, the hip pain was enough to keep her from her job, but no one was seeing the real culprit – lung cancer that had metastasized to the hip, formally diagnosed in July as stage 4 lung cancer, when she could barely catch a breath.  Four months later she was gone.  With barely enough time to get through the 5 stages of self-grief: denial, anger, bargaining, depression, and acceptance.

Four months may seem quick, but let me assure any such thinking, that living through those 2,880 hours (172,800 minutes) of mainly agony was anything but quick.  The waste of a life, the pain of drowning in your own fluid buildup, the struggle to breathe, the damage to her organs deprived of life-giving oxygen, the pain of her final days – where are the words to account why such a gentle soul should have to endure such that she did?

This happened to a non-smoker who endured decades of secondhand smoke from 2 chimney husbands.  The unfairness of it all is hard to process.  But who said that life was going to be fair?  We get what we get, we make the most of what we’re given, and all the in-between stuff is the fabric of living.

The grief that her only sibling, my husband, felt at the loss of his sister was palpable.  He delivered a heartfelt eulogy with many a sob as he struggled to finish his prepared words.  His tears at her dying bedside gushed stronger than their mother’s.  Yet we know that their 85-year old mother was absolutely crushed with the loss of her devoted daughter.  How can a parent not be devastated, to lose a child at any age?

When you love deeply you grieve deeply, but the outward signs of grief are not a yardstick to measure the grief of loss for the person.  Working through sadness is necessary to get to the other side of grief. This happens in each person’s own way and in their own time as the grieving process is different for each person, both in time to recover from the loss and in any public display of emotions.

Beyond emotions, grief has other channels that are not so obvious.  During the grieving cycle sleep, appetite, and energy patterns can be disrupted.  The common low energy or ‘laziness’ of grief is the body’s way of slowing down to properly mourn. Which means a lot of food isn’t needed.  And fighting the giving up of control that is sleep is a natural unconscious response.  So when grieving, life is not physiologically normal, beyond crying outbursts. I found myself sad and crying randomly for no reason for months after my father died.  Respect the process.

Unfortunately it is in our human nature to be judgmental; we can’t help it. “She doesn’t seem very upset; she’s not shedding many tears…” or “Is she still grieving?  Didn’t he die 10 years ago?” Somehow we think that grief should follow a set standard, or have common guidelines against what we personally think is acceptable ‘grieving behavior’.  But there is no right or wrong way to grieve; it is a personal process that each person goes through, alone or with support. Grieving is private and personal.

– Just being there with a comforting presence, a strong shoulder is of value; words aren’t always needed

– Crying alongside, showing your own feelings, is real empathy.  Hugs can go a very long way to show caring.

– Recalling your favorite memories about the deceased helps to acknowledge that their life had impact.  Not speaking about the person to avoid sadness diminishes their life, as if they never existed.

– Telling the truth, “I’m so very sorry for your loss” or “I just don’t know what to say” or “It’s OK not to be brave right now”

– Listening more than talking while asking questions that gently help the grieving person work through their feelings: “What’s your favorite memory of her?”, “What did you love most about him?”, “How are you feeling?”

– Help out in the days and weeks afterwards by taking action and doing, not merely suggesting “Call if you need anything”, since that call rarely comes as too hard to make when in the throes of grieving.

It’s hard to know what to say; there’s that awkwardness of being at a loss for words, but when the words do pop out, avoid saying the following, which just makes grief worse:

– “She is now in a better place/in heaven” not everyone believes in religion, plus the reminder that the person is gone forever is cause to miss them more.  Better to say, “She is no longer in pain” which is true and a relief when the suffering is over.

– “Cheer up, he wouldn’t want you to be sad” which may be true, but just isn’t possible to be happy, and failing on this adds to the burden.

– “Be strong (for the kids)” oh, the guilt of neglecting others in your grief is an added burden

– “I know how you feel” remember that everyone is different, so you don’t know

– “It was her time”, “There is a reason for everything”, “It was a blessing in disguise” all a bunch of crap

My SIL’s dying last week was the 5th family death this year including both sides of our families.  The oldest deaths were my 94-year old Aunt and Uncle, who died within 4 days of each other. The youngest was a 16-year old cousin who, like so many young people, thought he was invincible and could outrace a car.  None of them were ‘easy’ deaths; they all brought grief and deep loss.

Ultimately we grieve for our future selves, the remaining living.  We grieve for the loss of their company, for the memories they won’t share with us, for the time we will spend without them present.  We miss them and how they made us better because they were in our lives.  And sometimes we have regrets of our own that their death makes permanent.

A good use of the grieving experience is in relating to living others.  No regrets – say all your needed “I’m sorry”s, “I love you”s, “I forgive you”s, and “thank you”s now – those 4 issues are what people tell hospice workers they care about resolving most when the end is near. Making time now to take care of the Big Four while you can makes our living days better and our passing regret-free.

Death is ironically part of life – the circle of life.  Grief is an unpleasant but necessary by-product of living, to remind us of what’s truly important.