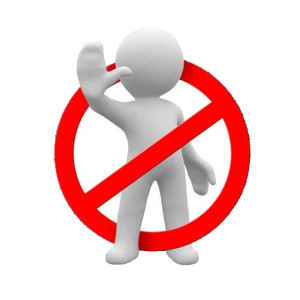 “Don’t worry, I’ll take care of everything” is actually the opposite of reassuring – this statement causes the person to start to worry.

“Don’t tell anyone about this.”  Yeah, do you think that will really happen?

“Don’t bother me with that nonsense” – too late; you’re going to be bothered.

“Don’t be late…” and now I’m thinking about being late or how late I’m going to be; all the things that may inadvertently cause me to be late, even if I don’t want to be.

And the classic trick “Don’t think about a pink elephant” which causes you to immediately think of exactly that.

So why does ‘don’t’ work this way?  It seems that the word ‘don’t’ makes us do the opposite of what is intended.  Actually, not the opposite, just the tangible.

What happens is that the brain processes what it knows in pictures to create a visual reality; the word ‘don’t’ is one of those words* that cannot be visually pictured.  There is no picture that represents ‘don’t’.  So when the brain is stumped, it goes to the nearest word that can be pictured and acts on visualizing that instead.

(*Other words that can’t be pictured are words like ‘think’, ‘understand’, ‘agree’, ‘get’, etc.  When ‘don’t’ is used in combination with one of these similarly unable to be pictured words, as in “I don’t think so” , “I don’t understand you at all”, “I don’t agree”, “I just don’t get it” then no ‘opposite’ effect happens, since there is nothing able to be pictured.)

Don’t is impossible to picture, whereas that pink elephant is quite easy to picture.

“Don’t tell anyone” … Hmmm, who can I tell, that maybe I shouldn’t?

As for “Don’t bother me” better to say: “Stop bothering me”, since ‘stop’ can be pictured.

Parents tend to ‘don’t’ their kids incessantly: Don’t go near that! Don’t pick your nose!  Don’t wipe your hands on your clothes!  Don’t hang around with so-and-so!  Don’t act up while I’m out! Don’t disappoint me.  Don’t be bad.  Don’t, don’t…don’t…

Don’t say ‘don’t’ without thinking about what you’re saying.

Now that you know this concept, plan to use ‘don’t’ strategically in your communication, to be most effective.

How can you use ‘don’t’ strategically? Here are some ideas –

“Don’t rush” should help to speed things along. (But don’t go overboard and add “take all the time you need” unless you really mean it and time is not a concern.)

“Oh, don’t mind me, I’m just blending in with the woodwork” should get you some attention (and we all crave being noticed at some level).

“Don’t worry about me” when you want to be fussed over a bit.

“Don’t rock the boat” when the boat needs rocking; needs someone to think about shaking things up a bit (but not when boat rocking is undesirable).

Watch out for big blanket statements like: “I don’t scare easily”, “Me, fail?  I don’t fail” – as these kind of statements set up for the stated behavior to be top of mind. (Now I’m thinking about scaring you.  And I can picture you failing…)

Have fun in your communications with your new understanding and more careful usage of ‘don’t’.  As for other words that can trip you up, don’t worry about how you may be unintentionally coming across – I’ve got you covered in future posts!