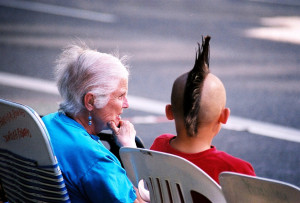 Is there a Generation Gap?  Ah, that catchall term that dumps confusion between people of different ages into the broad bucket of “I just don’t understand that other generation” [‘today’s crazy kids’, or ‘old geezers’, depending on your perspective] with the unstated: “and I don’t want to understand them!”

Oh definitely, the generations can be mentally worlds apart, since we are all greatly influenced and defined by our times; we can’t help but not be.  While some individuals break out of the mold, most of us are a product of our times.  And those times fall into rough generational chunks. Each generation shapes the world to their image, leaving their unique mark.

What? – Millions of strangers who don’t all know each other can have a similar image?  Collectively, yes, that’s what happens, with peer identification.  Just look to fashion, language, and music as examples.  We need like-minded others to go on the great journey of life with, to make the trip more enjoyable.

Prior to the 20th century the generations weren’t as blatantly defined as they are today because the times didn’t change as rapidly, especially in the large established cultures outside of the US.  For years and years the lives of our forebearers pretty much ran their course along routine lines.  Call it dull, or call it comforting – life was predictable.

The current labeling of generations in the US started with the GI Generation or The Greatest Generation, born at the turn of the century (1901-1926).  They were the most revered and fascinating generation ever.

The Big One – WW II – was really a defining time and everything shifted from there.  Those born before or during WW II are called The Silents or The Matures (1927-1945).  They knew the war intimately. Then when all those soldiers came home, the Baby Boomers were born (1946-1964), the largest generation in history.

The Boomers birthed the Gen Xers (1965-1981), a latch key generation with career-obsessed, often divorced parents.  Those careers got in the way of big families, so Gen X is a smaller generation.

Then along came the Information Age in full bloom to replace the Industrial Age.  And with the Digital Age came the Millennials (1982-2004?).  Those smiling baby faces don’t know an existence without technology.

[The newest generation, Gen Z, are too young to discuss an impact – yet.]

So why should we take note of the different generations – aren’t people just people?

It’s important to understand generational differences because of the impact on ideas, values and beliefs.  When communicating with different ages, the approach, the method of presenting new ideas, the understanding of the forces that shaped their worldview, can and should vary depending on who they are.

Meeting people where they are in this one dimension, showing an appreciation of a way of thinking that helps defines a person, is a good channel to bridge the very real generation gap.

Over the next series of post the subject covered will be each generation, one at a time, delving into the highlights of how that is done – how to best communication with each generation as defined above, on their own terms.

Up next time: MILLENNIALS – they’re all around in droves, let’s communicate with them effectively!