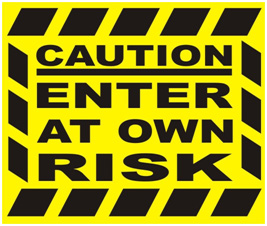 Taranaki, Australia was a nuclear bomb testing site from 1956-1963.  In April it opened as a tourist attraction.  Yep, some entrepreneur is charging tourists to walk the poisoned ground that the aborigines still avoid.

And not just testing little bombs – big bombs.  One was 27 kilotons, which surpassed what was dropped on Hiroshima and Nagasaki. With the half life of plutonium, this area won’t be fully naturally decontaminated for 24,000 years, but who’s counting?

The early visitors to the site had comments like, “I’m hoping to put my watch down to recharge, so it will glow every night for the rest of my life” and “We’re eating lunch literally 200 meters from where one of the bombs was let off, so there’s obviously some radiation issues…which I hope is minimal, but ask me again in 10 years.”  So deep down they know there’s a danger potential, but it’s not imminent, and maybe that’s the true attraction of the site.

Now I know some of you are thinking: If it wasn’t safe, the government wouldn’t allow it to be opened to the public, so it’s probably OK.

And others of you have the opposite thinking: Even if it were deemed safe, which it’s not 100%, why take a chance?  You’re risking radiation poisoning to look at the ground?  Why?

I’m in the latter camp; I don’t get the attraction at all.  Any visitor to this new tourist ‘hot’ spot has a latent death wish.  There is absolutely nothing to see.  And to just have the honor to say you visited a nuclear testing site is worth zilch in my book.

However what I do find intriguing is the distinct relationship of this new activity and our universal ambivalence towards risk.  We all run towards and run away from risk, in varying degrees and depending on what is involved.

Understanding attitudes towards risk helps to understand people better, which leads to stronger communication and ability to relate.  Some people love risk – they don’t feel alive if they aren’t living close to the edge.  Mountain climbers – like my cousin still scaling the world’s highest peaks at 60+ years – sky divers, speed demons.  Ah the rush of adrenaline gives them such a high.  Looking death in the eye is the only way to live!

There are others who are scared of their own shadow, noises of any kind, and don’t even think about what’s down in the dark cellar.  The very thought of risk puts their teeth on edge.  They are the worriers of the world who take no chances and worry about everyone else taking unnecessary risks.  What’s to gain when there is so much to lose?  Why would you ever risk anything, simply for a thrill?  That’s madness.  And also stupid.

Risk comes from our Neanderthal roots, where all basic drives originated.   Back then risk represented either an opportunity (those red berries look delicious! and I’m hungry) or a threat (those red berries may be poisonous…and may kill my hunger permanently).  And to survive, risk had to be undertaken.  So adrenaline evolved in to make risk taking feel good enough to undertake.  A rush of adrenaline indeed feels great, almost invincible, with all that blood rushing to the extremities, geared up to do battle.

We just wish teenagers would lose some of that invincible feeling, which leads to too much risky behavior.  Parents of teens, grit your teeth and repeat after me: This too shall pass.

But too much adrenaline feels bad; nerves constantly on edge.  Ever ready to spring into action at the slightest provocation.  Can’t relax.  Bummer.  Turn it off. A little boredom would be welcome relief for these poor over wrought folks.

Today saber tooth tigers and wooly mammoths have been replaced by slot machines and smiling strangers.  Should you take the risk, or is this really risking it all?  What’s to be gained?  And can we step back enough from the shiny lights to think it though logically, without getting caught up in the sweep of emotion?

Risk taker or risk hater?  There are so many risky choices to be made – take the new job? Move? Loan a friend money?  Who you are and who your children will grow up to be is due in large part to environmental influences, which shapes attitudes towards risk.  Helping those you care about with their risk insecurities or outsized risky personalities is complicated.  Better to understand and accept them as they are rather than trying to change them, which can’t be done.

Is it safe?  More importantly: Why do you need it to be?