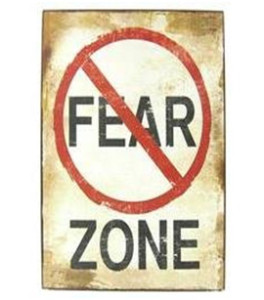 “We have nothing to fear but fear itself”…yeah, FDR, but that fear can be really hard to address or even to identify.

Name your fear – the big ones:

Fear of FAILURE, or its flip side: Fear of SUCCESS

Fear of BEING WRONG, a huge blow to our fragile self-esteem

Fear of NOT BEING LIKED, i.e. WANTING TO PLEASE EVERYONE

Our greatest fears are debilitating yet we dare not face them.  Why not?  Because living with your fear has become habitual.  It’s easy to live with the familiar, heck it’s actually comfortable, in a shouldn’t-be-but-just-is-the-way-I-am sort of way.

Deep down we may think that we want to address our fear to change it, but in reality moving out of your comfort zone can be just too painful to actually do.

Fear of failure – this fear keeps you frozen in place and not taking that action that you really want, which just doesn’t happen; how can it with your inner voice perpetually whispering that you’re going to fail, pointing out all the things that will likely go wrong and keeping you from ever risking outsized success.  With such negative self-talk you remain on the sidelines, too scared to take a chance on your bigger dreams.

Fear of success is the inverted version of fear of failure; if you succeed, many things will change and that’s really not what you want.  Deep down.  Oh, you claim to want to succeed, but by not actually doing what’s needed to actually succeed, nothing has to change.  It’s just talk, and talk without action is easy to dismiss.

We all like to be right, but we fear being wrong more than wanting to be right.  This fear is hard to pinpoint, which makes it even more dangerous.  It’s the fear that sends you down the wrong road, but makes you too stubborn to admit the possibility of error.  This can cost big bucks, plus wasted time, effort and opportunity.  This is “the pig headed fear” of acting like you know all the answers and listening to no one else.  The fear of being wrong can really be crippling.

Fear of not being liked – trying to please everyone is impossible and can end up blowing up in your face as someone always ends up hurt or feeling slighted.  It’s just not feasible to be liked by everyone, yet we try, and try, and try some more.  We may offhandedly throw out an, “I don’t care what anyone else thinks”, which we may try to fool ourselves that we believe, but it’s simply not in our DNA to not care about others; we are empathetic by nature.  Everyone is social due to survival necessity; we want to be liked, to be part of the group.  Inclusion is a big driver.  Alienation feels terrible.  And when we displease others we risk being shunned, voted off the island, lonely – a fate worse than death.  We can’t live without the support of others.

I’m dating myself when I recall Sally Field accepting the Best Actress Academy Award for Coal Miner’s Daughter, to which she gushed on stage, “You like me, you really like me!”  Social affirmation just feels so good; we fear losing it.

What’s the cure to overcoming our fears so we don’t fall prey to them?  One technique is to make them concrete and specific.  It’s much easier to work with what’s tangible and known than what’s abstract and vague.  When you can nail down the fear, you can analyze it; you can’t get your arms around something that’s too general.  [A mental block falls into the latter category, which is a different animal from a fear.]

Another technique to smash through fear is to really listen to others; actively solicit the feedback of knowledgeable others.  Then act on that feedback, since you know that you really don’t have a corner on all the good ideas.

Getting control of your little inner whispers helps to reduce fear.  Reframe your thoughts from negative to positive.  No, everyone doesn’t talk about you behind your back and their laughter is not directed at you.  You may think you’re universally top of mind to everyone you come in contact with, but it’s just your insecurities talking.  No one notices all your flaws, I guarantee you.

But don’t go out of our way to be boorish either, which will put you in everyone’s doghouse, for a rather long time, if you allow yourself childish indulgences.

It’s not easy to face long-seated fears or to communicate our fears to others for their help and support in self-improvement.  But saying it aloud, acknowledging its existence is a good first step.  Then working on eradication is a foregone conclusion; not easy but worth the work, with success as a worthy by-product.

What big fear should you be addressing, keeping you from your greater success?