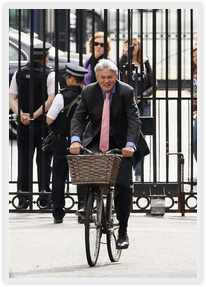 Examples of the powerful effects of using the wrong words are in the headlines almost daily while in the height of political season.  Romney says something, which gets him into trouble, recanting with “my words were taken out of context”.  Obama says something that paints him in an unfavorable light, much to the horror of his advisors.

Andrew Mitchell, a British cabinet minister, angrily swears at the police for doing their job (they asked him to get off of his bicycle to pass through the gates at Downing Street) and he calls them “plebs”.  The swearing was acceptable but using the word “plebs” was not; he was forced to resign from his position days later due to the uproar. Using a pejorative term for the working class by an government representative was simply unacceptable.

A different example in written communication: yesterday I received a fundraising appeal letter that started with, “Ms. Martin [impersonally trying to be personal], thank you for your support [I haven’t given to this cause previously, so this was a play to get reciprocity – if I am thanked in advance I may feel that I now owe them].  You may have already sent a gift [trying to get me to feel guilty if I haven’t given].  If you have, we are truly grateful [not grateful enough to check their records and either: a) send a proper thank you, or b) not waste the postage on this mailing].  If you have not [here comes the zinger], please take a moment to read my note inside [now there was no motivation to open the note, since I know at this point that to do so will subject me to the hard sell].

This 34-word, 4-line paragraph was along the top of the address page, received in a decorative envelope with no return address.  The envelope was clearly designed to get me to open it, since it looked like it could have been a card, although the bulk mail stamp and windowed envelope gave it away for the solicitation that it was.

While I don’t fault non-profits for trying to fundraise, the marketing budget might include better advice on what to write in the solicitation to get a favorable response.  And in this case, since I didn’t open the note, I can’t advise on what it should have said.  I just know that this approach didn’t communicate with me to take the desired action (i.e. to open the note) for all the reasons detailed above.  It would have been better to have written nothing at all, in which case I would have opened the note to see who it was from after I opened the mysterious envelope.  Instead the wording, the first thing readable, turned me away from taking the desired action.

With written communication comes the additional burden of conveying tone.  All words are imbued with tone and different tones suggest a myriad of different meanings.  How, then, do you get your desired meaning conveyed with the written word?  When tone is not audibly heard, the reader of the written word infers the writer’s tone, accurately or inaccurately, and differently depending on each reader’s personal experience.  The importance of word selection, especially to a mass audience as a fundraising appeal is, cannot be stressed enough. Or the appeal becomes a sad waste of the non-profit organization’s funds.  ‘Mail to fail’ is a popular euphuism for a reason.

COMMUNICATION TAKEAWAY:  Words carry immense power – with certain words more heavily charged than others – the proper and improper usage of just words can make and break careers, relationships, future prospects.  Carefully selecting word choice, especially in the heat of emotion or at the height of confusion, can make a big difference.  And all it takes is a moment of silence – biting your tongue, saying nothing at all – and in those few seconds the lightning fast brain can think things through more carefully and make the best choice of what words to send out of the mouth.

QUESTION:  Have you ever said something, regretting your words immediately afterwards?