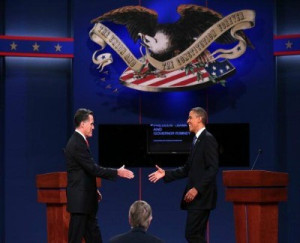 We live in a media age; media image is critical to political success.  The influence of media on the presidential election started with JFK and Nixon; we know that media won the election for JFK, regardless of his being an Irish Catholic.  JFK knew how to play to the camera, as did Reagan, a former actor.  When Geraldine Ferraro lost her bid to be the first female VP, part of her image problem was due in large part to her lack of understanding of how to portray herself on camera.  When asked a question in her VP debate, she often looked down while thinking (a kinesthetic, she was mulling the question over, i.e. talking to herself) which caused the viewing audience to believe she was less than forthcoming; she wouldn’t ‘look them in the eye’.  How unfortunate that she didn’t understand the power of media image in the election results back in ‘84.Now we have Obama and Romney.  While pondering who won each debate can be debated itself for hours without resolution, what is undisputed is the importance of not only the image conveyed in the debates, but also of the other media coverage throughout the campaigning.  Today it’s a whole process of impression management, with cameras that will keep rolling right up to Nov 6th.  But for now, barring any last minute blowups, here are 4 exceptionally good (but not ironclad) indicators of the election results, from the world of communication skills.

The handshake – all politicians like to be on the left side when being photographed shaking hands because they have the top hand position, which is the power position.  Obama’s handshake tends to be angled so his hand is on top when he wants to show his dominance.  In the picture above, from the first debate where he was positioned behind the right podium, he has to come into the handshake from the right side; you can see his left hand coming up as he approaches the obligatory opening debate handshake with Romney.  This visible left hand secures the outside (top) hand position to the camera; with Obama, the left hand often rises to clasp the other man’s forearm, showing the security of Obama’s power position, especially when photographed shaking hands.

Height – the taller candidate just about always wins every election.  Standing tall with good posture speaks to good bearing and strong confidence.  We like our candidates to be tall and as regal as they can be, without royalty in this country.  So who is taller, Romney or Obama?  I believe Romney is taller by an inch (hair?), but it’s extremely hard to tell and they come across as virtually the same height.  So this one is a draw.

Blink rate – yes, some people actually take the time to measure how many times a minute each candidate blinks.  This isn’t so farfetched as blinking is a stress indicator.  The candidate with the lower blink rate is more composed and therefore appears more presidential.  Throughout recent history, when blink rate could be actually counted and documented, the candidate who blinked the most during the debates lost the election.  The counters say that during the first election Obama blinked more, but not enough to be meaningful.  Other counters say that Obama blinks several times in quick succession followed by long periods of no blinking, which throws the counts off, giving Romney the higher blink rate in the first debate.  As for the second debate, my impression was that Romney had a higher blink rate but I didn’t actually count.  However Obama is known for his composure, which blink rate is measuring.  Bottom line on this indicator: who appears more presidential?  The incumbent, who has the job already, usually wins on acting presidential.

Likability – this one is actually huge since we do want to like our elected president.  Obama when he was first elected was very likable and Romney from the beginning is rather unlikable.  Romney comes across as aloof and distant, although he certainly is trying to warm up his image.  But Romney’s pat insincere smile that he maintain during the second debate more often came across as smug, not as likable.  Obama’s likability has dropped of late, but he still has the first four years in his pocket and first impressions are hard to beat without major missteps.  His approval rating may go up or down depending on the issue at hand but his basic likability is still intact.  We may not like his actions but we do not dislike the man himself.  Romney has still not proven likable, and again first impressions are hard to overcome.  Since it’s an uphill battle for Romney to become likable, this point goes to Obama.  Plus Obama has an ace – Michelle, who is just about the most likable woman in America today.  Romney’s wife is fairly innocuous.

What all this proves is that the undecided voter makes the final decision based on a feeling that they get when looking at the candidates in the media.  They are swayed positively and negatively by the ideas and positions that each man espouses, which is why they are undecided in the first place.  So the unconscious determinants become:  acting the part (handshake), looking the part (posture and height), composure (blink rate), and likability.  This composite decision is made unconsciously.  If you watch the debates with the sound off, you can see who will win over the undecided voters.  While ideas are certainly important, the de facto winner is truly the best communicator.

COMMUNICATION TAKEAWAY:  Not just in elections, but whenever a person is undecided, the unconscious will use hidden communication factors to make the final decision.  Knowing this can help you to convince the undecided by your portrayal of confidence