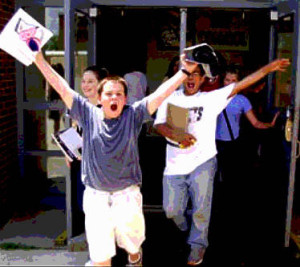 My neighbor is a teacher of tweens.  She shared a strategy that she claims works every time with her students when she wants to get a student to self-admit to bad behavior.  Here is her strategy:

Situation: Teacher sees Joe and Jim accusing each other of doing the same bad behavior .

Teacher to Joe:  I know what you did. [She doesn’t know and doesn’t name anything specifically]

Teacher:   Well since you didn’t do it, you must feel so bad that Jim is accusing you of doing something that you didn’t do… Jim must not like you very much to be saying this about you.

[If Joe is truly innocent of the behavior and doesn’t self-admit guilt, then she has the same conversation with Jim, who then admits his guilt.]

Notice that this successful strategy does not involve any threats, dire consequences or mention of punishment.  And by getting the guilty party to self-admit, they then own their behavior, and whatever consequences are forthcoming.

So let’s analyze this technique –

1)      She does initially accuse without being specific of the action, allowing the student’s imagination take over.

2)      She is patient and waits for the expected response, without jumping in with “So would you like to tell me why you do it?” or any pending punishment.

3)      She accepts rather than refutes the denial, but then cleverly uses a psychological tactic incorporating peer acceptance and social standing in reverse

Several things are at work that drives this successful strategy to get compliance with minimal effort and no fight.  For one thing, kids have an innate sense of fairness.  In an unfair world, they still hold out hope that there is honor among their own.  At least the good kids do, and most kids are basically good.  They may not mind cheating the system, or shortchanging an adult (who they think deserves it), or scamming faceless society in general, but when an innocent one of their own is going to take the blame, that decency kicks in.

Another factor is that we all feel closer to a situation when the victim is close by.  When you know who is involved, my name, or face, or both, the heartstrings are engaged.  It’s the same tactic fundraisers use to put a face to famine in Africa.  You are more apt to donate when you see the young faces then when you hear emotionless statistics of starvation.

Peer acceptance is hugely important with kids.  But using this ‘against’ them can work well to gain good behavior.

COMMUNICATION TAKEAWAY:  There are easy and creative ways to elicit desired behavior with adolescents, sometimes by going in through the back door instead of the front door, to gain the good results without a fight.