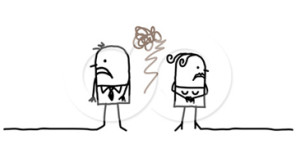 My husband of 30+ years and I recently went to a barbecue with just a few couples, who we’ve known for several years.    The other couples there had also been married for many years.  At one point one woman mentioned that her knee has been swelling off and on for years, and the situation was really bad of late.  In fact her knee was so swollen that night that it was hard to get her pant leg on over it.  While that was sad to hear, I was sadder to hear her husband make a crack that her swollen knee was nothing compared to the size of her a**.  Wow, where did that comment come from?!  (And for the record, she is very slim.)
Our first landlord, who we considered a really nice guy, used to always make demeaning jokes at his wife’s expense.  Even back then when I was just a newly married twenty something, I felt something wasn’t right about that situation and that those kinds of jokes weren’t really funny.  That couple, with two young boys at the time, are no longer married, which comes as no surprise.

So why do some people sabotage the closest relationship in their lives?  In both of these cases, the husband’s self-esteem was not as strong as the wife’s, and he erroneously thought that by putting her down he would build himself up.  How sad it is that we often take for granted and hurt those that are closest to us.  We often treat strangers and near strangers better, with more politeness, then we treat our own family.

Marriages can withstand a lot through the years, some lasting against all odds when by all accounts the two were wrong for each other, or grew distant over time.  My parents experienced such a marriage, staying together into their 80s in a loveless marriage out of habit.  So what is the glue that holds good marriages together, and what is the top that signals impending divorce?

Long married people are proven to be healthier, happier, and live longer than unmarried people.  When people who have been married for long time were surveyed, it was revealed that the top trait that keeps people happy in a marriage is having some space – having their own room to grow individually, develop some of their own interests, time to do their own thing.

And the top problematic relationship trait that cannot be resolved?  Contempt.  When one spouse shows contempt for the other, the marriage is in too much trouble to be saved.  How is contempt different from disgust?  Disgust primarily involves an offense to the senses – a sight, a smell, or a taste – disgust usually with a bodily component.  Contempt on the other hand, has to do with the person and their behavior, often combining with anger.  When someone is snubbed, they are often dismissed with contempt.  When one person dismisses the other person with contempt, it is a sure sign that the relationship is beyond repair.

COMMUNICATION TAKEAWAY:  If you become aware of feeling contempt for someone, take a good look at the relationship and determine if you want to change the situation, which you can still do in the beginning.  If someone shows contempt for you, and it’s a longtime habit, start looking for another relationship, since you can’t change another person’s behavior and this one is a biggie.

QUESTION: Have you noticed contempt shown – to yourself or to another- in recent memory?