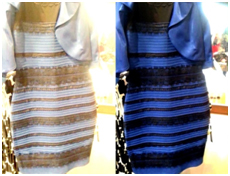 What “The Dress” Communicates

“The dress that broke the internet” had a big, though brief, splash just a few short weeks ago, dividing friends and families who stood staunchly on their view of “it’s clearly blue and black!” versus “it’s absolutely white with gold!” – quite polarizing, since to both sides it was no contest, with no room for doubt.

Some people almost came to blows over “the dress”.  How can something so obvious to so many be equally obvious in a different way to so many others?  Hard to understand and we fear what we don’t understand.  So we fight to defend our sanity and our ego.  Because once we take a firm stand, we hate to back down (think: hung juries).  We hate to be wrong and made to look stupid.  “How can you not SEE that this dress is blue with black – what’s wrong with you??”  When egos and name calling are involved, blows and hurt feelings easily follow.

How did this alternate reality happen?

Yes, lighting and different screen pixels had a role, but science gives a biological explanation of why this dichotomy occurred, namely that some people discounted the blue in the dress and came up with the white and gold combo (white being the absence of all color, so without blue nothing is left except no blue, i.e. white).  The real question is why did some peoples’ eyes do this, while others did not?

It happened because some people have more blue ‘cones’ than other people have. (Human vision is a combo of photoreceptors called rods and cones, with lots of rods and fewer cones, responsible for color perception)  Those people with fewer blue cones discounted the blue; those with more blue cones saw the blue and black (black, which includes all colors, needs blue to be seen).

What’s fascinating is that, according to color expert Professor William Lidwell of The University of Houston, blue was the last color to develop in human vision; in the time of Homer and before, no one saw blue as it simply wasn’t a color choice.  Back then human brains did not have the capacity to see that last evolving color.  Now, 1,000 years later, blue is the universally favorite color.  We call earth the blue planet because of beautiful blue skies and blue water.  Imagine a world without blue, how our ancestors 30 generations ago saw the world – disappointing!

What “the dress” really communicates is the willingness of the person to be flexible and allow the consideration of a seemingly impossible possibility.  Is something really not real because it reads false to our eyes?  Do we really believe that we have all the answers?  Must we stand strong on our views, because we can’t accept the idea of conflicting evidence that is hard, if not impossible, to “see”?  Are we willing to suspend our disbelief and allow that perhaps other views can be different, with both as accurate?

What’s true for one person is not necessarily true for another.  But ‘not true’ does not always equal ‘false’.  Now there’s a concept that needs some consideration.  Just because someone doesn’t see what you see doesn’t mean that you’re right and they’re wrong.  You can both be different and both be right; what’s right for one person is their reality and we all live in our own realities.  What your eyes see as right is right for you, pure and simple and TRUE (for you).

The dress communicated not just mental flexibility but also tolerance.  Tolerating different points of view without prejudice.  Instead of being judgmental change to being inquisitive: what’s going on here?  how is this possible? – this is the real message in this optical illusion.  What have you learned about the other person’s communication style, instead of how do I prove to this person that I’m right and they’re wrong?  That’s the win-win in this seeming dichotomy – we’re both right!

What behavior did you clearly see regarding “the dress” color?