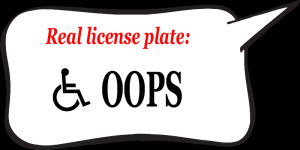 You know this scenario – you’re driving along and the car in front of you has a combination of letters and numbers that you think must be saying something.  Since you’re just sitting there anyway driving, you figure you might as well play along.  But this one is particularly baffling and you wonder why on earth someone would waste their money on something so obscure as to be unreadable!  Or maybe after some, or perhaps little effort, you get it – how clever!  Or how stupid!  Either way, it’s certainly an interesting way to communicate.

I got my first vanity plate in college for the practical reason that I had many many campus parking tickets that I didn’t want to pay.  The vanity plate was only $25, which was far less than the outstanding tickets, and since the new plate wasn’t registered with the school security dept that issued parking tickets, my little idea worked exactly as planned!  What did the plate read?  “MAY 31”, my upcoming wedding date.  Many people thought I got it to honor our pending nuptials – ha! Little did they know suspect the real reason!  While an important date for sure, still not a top expense for a starving college student whose real motivation was to save money, not to indulge in unnecessarily honoring a date on the calendar when a free license plate was perfectly fine.

My next vanity plate was for a different purpose – to honor my kids: 4GR8 KDS and did it ever.  I got great mileage with that plate on my van (with 4 kids, a dog, friends, lawn chairs, blankets, and a sundry of sports equipment of course I traded in the safety of the Volvo for a revolving series of vans), noticing many neighboring copycats (3GR8 KDS, GR8 KDS, MY GR8KD).  Although when you try to be too clever, with the space limitations of a license plate, it can get confusing.  Is GR8 KDS an 8th grade teacher? Is MY GR8KD easily understandable?  For my plate, the best part is the effect having that vanity plate had on my own kids.  I didn’t anticipate the boost it gave them when they saw it and the associated pride they felt, which they only told me about years later.  So now I highly recommend that parents invest in a vanity license plate honoring their kids – the minor costs pay big unexpected dividends over time, as all good dividend programs do.

People get vanity plates for a variety of reasons: inside joke, name of a business or their profession, their nickname, their interests, hobbies, things places they love, pets – with dogs as especially big, and humor.  I’ve never understood spending extra money simply to ride around with a targeted expression on your bumper to talk to the driver behind you like:

I do get buying a clever plate that ties in with your job:  BFLXBLE, JUSTIZ, DECAY (also DK)

But when the vanity plate is out of context and is a struggle to understand, I have to wonder?

DZNEMAGK, NNTHRCAR, FSRODAH  – say, whaaat?  Ok, ‘Disney Magic’ I get, eventually, but the other 2…??  Total nonsense, and not worth going off the road to ponder.

And the plates that the DMV try to catch but sometimes slip through, SXMCHN, UEJIT, including in other languages (notably Spanish words) and those read backwards in a rear view mirror: 3MTA3 or even upside down and backwards: SSVNWI  Oh, so tricky those little devils trying, and sometimes succeeding, in getting away with things!

So what are we trying to communicate with our vanity license plate, if we choose to buy one?  The purpose of any vanity plate is simply to scream: LOOK AT ME – that basic urge, need, want to be noticed, to have attention paid, to not be overlooked, not to be taken for granted.  Deep down, we all don’t want to be ignored, forgotten, feel invisible.  Our need for attention is primal, it’s how we leave our mark, pass on our DNA, make our existence count.

Cars are an extension of selves, and license plates are a car’s only embellishment (along with paint, but that’s not easily changable).  We can personalize our car, or not, with our choice of model and color (not always an option in the ready market) with the vanity plate as the easiest way to do so.

Whether we choose a message as a self-reflection, as an outgoing message to others, or merely as an entertaining message, the vanity plate is an extension of our public persona – how we want to be viewed in the world.  When you are out driving and see your next vanity plate, think beyond the words as to what it tells you about the driver.  Might someone with SCUSME be more polite to let you in their lane?  Might someone with SXMCHN be more prone to road rage?

Next time the topic is: TRUST BUILDING–the equation to gain the most important element in a relationship.

Are you sporting a vanity plate?  Comment on what that says about you and how it might reflect on your view of the world?