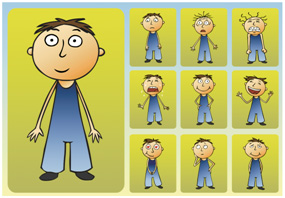 Feelings can be such a minefield – it’s hard to know what to say some of the time because you just don’t know how your hypersensitive teen is going to take the littlest thing!  Sometimes something as innocent as a look can really set her off.  And forget about agreeing with him, without hearing a retort of, “Yeah, what do you know about anything anyway?”  “What?!?  I was just agreeing with you….”

It really is imperative to listen to the feelings first because teens can truly be “giant, quivering balls of emotion”; a perfectly normal condition for any normal teen.  And you should know that these intense emotions are scary for them too.  Being under the influence of highly charged emotions keeps them from feeling in control, with the result that they truly may be unable to listen to you rationally.  Give them some latitude during these years.

When kids bring out the big guns of feelings – when he lobs the “H” word your way – it certainly hurts.  “I hate you!  I wish you weren’t my parents!”  Ouch, it IS hard to brush off, but know that it’s not really meant and it’s not a permanent feeling.  The next day, when the intense feeling has passed, it is a brand new day.  She may even come back and tell you that she didn’t mean it.  Or not yet.  But she doesn’t really mean it; it’s those highly charged emotions driving the words.

It’s hard for a teen to be so close to independence, yet so dependent for awhile longer.  They rail against any perceived loss of freedom, not to be able to do exactly what they want to do.  They chafe against your sensible rules.  And they know they are physically able not to be restrained.  It’s hard to be the good kid and keep to the straight and narrow when everything inside them tells them to break free.

The best thing a parent can do is to:

Know that the offer was enough and showed good support.  Trust that he can solve it himself or that she will ask later if she then decides to take your help.

Dealing with feelings is an art, not a science

This does not help!  Children don’t like to hear their parents repeat the names they may call themselves.  Instead go to the process above, i.e. except the feelings first.

“It’s hard to see all the glamorized images in magazines and not compare your looks to those models.”

“School can be hard to keep up with every subject.”

Carry on.  Practice the process.  Change is hard, but you can do it.  Soon they will see the change in your reaction and will start opening up to you more, which is what you want – an enhanced relationship!