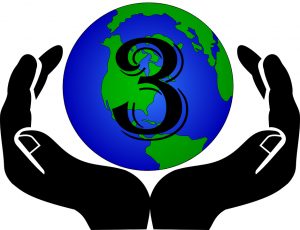 The other day my daughter was looking on social media and read somewhere that Paul McCartney had died – no!  It’s not true – let’s make sure we’re not advancing any bad rumors here.  Sir Paul is NOT dead, likely he’s in fine health.

But my other daughter quickly said, “Yup, things happen in threes.  First it was Prince, then Ali, so…”  How quickly we are to believe something simply because of the irrational concept that ‘things always happen in threes’.

Why is it that we think this way?  Why is the brain so apt to enjoy the comfort of things happening in threes, when there is no rationality for this line of thinking?

As a small number, 3 is an easy recall and so it is processed smoothly. In linguistic lingo this is a concept called cognitive fluency, simply meaning that we like things that are easy to think about – duh!  Of course – who wants to think about hard stuff?

It used to be that not so very long ago we could recall a string of 9 things, hence our 9-digit Social Security numbers.  But as the times became more complex, with ever more things to remember, our capacity to recall dropped down to 7 things, i.e. phone numbers (back when area codes were all the same for a state and didn’t need to be remembered).

Then the complexity of the world escalated further and the 7 item recall capacity dropped down to 4-5 things that we could easily hold in short-term memory, which is where we are in today’s uber-data world.  Throughout it all, 3 remained unwaveringly easy.

Those 3 little pigs, Goldilocks and that family of 3 bears, 3 Billy goats gruff – our childhood stories and nursery rhymes reinforced the concept of the world built around 3.  When you have 3 items – not 2 that feels like something is lacking, or 4 that is starting to strain our memory – then it feels like all is right with the world and things are as they should be.

So why is this good to know in the world of communication?  When you are communicating, if you remember the rule of 3 you will be most effective in your communication. Give 3 reasons to back up your argument; if there are only 2 strong reasons come up with a third.  Really.  If there are 4 strong reasons, go with the 3 strongest ones, and omit the fourth weakest one.

When describing something list 3 supporting details.  Was he tall, dark and handsome?  Well he wasn’t short and squat, but maybe he was short, squat and pimply. Get how ‘short and squat’ is just a little too brief and feels like something is missing without the third trait added on?

It’s like the brain is waiting for the third item to process, which is much more comfortable than not having it.  And cognitive comfort, fluency, and ease of understanding (see how I came up the third item here, which wasn’t immediately obvious what it would be, but was necessary to have – 3!) leads to a perception of accuracy. When something is smooth and easy to process, it rings to the brain as truer than not.  This has no rational basis whatsoever, but there it is nonetheless.

Which is why my daughter was so quick to believe that the recent demise of Paul McCartney was likely true.  Logically it makes no sense that one celebrity death would have any bearing on another famous unrelated person’s life, yet something in our brain says “that feels about right”.

This is the concept of closure, pattern completion that the brain strives for constantly. As we try to make sense of the world around us, the brain seeks patterns to gain understanding and put the unfamiliar into the familiar.  The pattern of 3 is such a strong one that it literally begs for completion.

The format of “___________, ___________ and ___________” is important to maintain in writing, in all communication, for best effectiveness.  Maintain it and you will not only have credibility, but perceived accuracy as well.  Ignore the Rule of 3 and your communication will unnecessarily suffer.