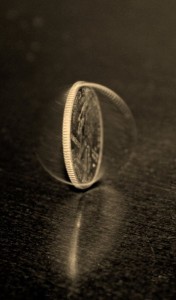 Let me get this straight: when the weatherman says it’s going to be partly cloudy, it really means: mostly sunny – is that about right?!?  That is indeed correct, because ‘partly’ is the lesser of the whole, and ‘mostly’ is the part that’s not being mentioned; partly cloudy is code for mostly sunny.  Whoa, I’m confused – why doesn’t the weatherman then just say what he means, which is mostly sunny, instead of talking in riddles and expecting you to figure it out?  That makes no sense at all that the TV viewer needs to be a riddle master to see the obvious…

When my late SIL read about her lung cancer survival odds, it was a 1% chance of living for 5 years.  Of course the opposite is a rather daunting statistic: 99% chance of dying within 5 years.  So when things are looking especially grim, the best lipstick to put on the pig is the smallest number.

But invariably, the smallest number is used, in good and bad cases, which makes absolutely no sense.  In bad case scenarios, the small number can represent the pessimistic view – it’s partly cloudy because a small cloud may end up raining on your picnic.  The optimistic view that isn’t taken is that it will be mostly sunny, a far greater chance of a lovely sunny picnic experience.  The small number can also represent the optimistic view – you have a very small chance of surviving this devastating disease, with the looming pessimistic view as overwhelmingly large.

In good case scenarios, the small number can represent the pessimistic view – there is a small chance of failing.  But the optimistic view is so much better, yet not mentioned: you have a great chance of succeeding!  The small number can also represent the optimistic view – a small number of people win the lottery, with the more likely case of the majority of people losing. Repeatedly losing, but no matter. The ads cheerfully read: Imagine what you will do with the multi-million dollar jackpot; you can’t win if you don’t get in!  And in small print: chances of winning are 1 in a gazillion.

So why the default to the small number most of the time, in good and in bad scenarios?

Glass half empty or half full?  The cautious realists among us would say ‘half empty’; the joyful optimists chirp ‘half full!’  It’s all in your point of view.

We are naturally geared to be fearful of losing anything, to hate loss over potential gain, to be wary of anything that appears too good to be true.  We are natural worriers and born skeptics, especially in today’s world rife with scammers. It’s good to exercise proper caution.

But we also love novelty, the opportunity that’s right around the corner, if only we have our eyes open wide enough to see it.  That’s the glass half full crowd.  Naïve and gullible?  Maybe sometimes.  But also lovable and happy, with their rose colored glasses and full of zest for life.

The moral is to look to the other side and don’t be fooled by the small number all the time, just because that’s the only number given.  Think: what does the opposite – the large number – say?  Which number, small or large, is better for me to pay attention to in this particular situation right now?

Every coin has a flip side, but you have to remember to turn it over and look at the other side.