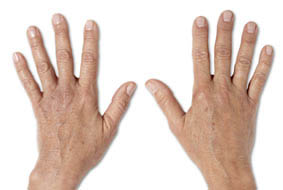 Here’s news you may not know: the male’s ring finger size can tell a lot about his communication, especially his treatment of females!  Hogwash, you say – how can that be valid?  Well, the idea indeed has a scientific basis.

Everyone, male and female, has testosterone, with males having a larger dose than most females.  When males are in the womb, they are exposed to their mother’s testosterone (among other hormones) – the smaller ratio of the mother’s testosterone, the greater amount of male hormone is developed by the male fetus.  And men with smaller testosterone levels are just nicer to females –spouses, friends, co-workers and colleagues.

According to a McGill University study these nicer guys “listen attentively, smile and laugh” and are more apt to “compromise or compliment” a woman rather than argue with her.  They are less apt to pick a fight with a female; men with higher levels of testosterone will quarrel and argue with either gender indiscriminately.

Nicer men tend to have better, stronger, more companionable relationships – they are just easier to get along with.  Nice guys are better hubbies. This leads to having more children because their nature is to be more harmonious with women.

So where’s the ring finger connection?  In the study of a large mixed gender test group a correlation was discovered between male finger length and social interactions, tracked over several weeks.  Specifically interactions that lasted over 5 minutes were all recorded and then categorized as agreeable or quarrelsome for 20 days.

With females, there was no correlation between finger size and behavior.  With the males, the gender finger rule was established as occurring 30% more often (30% is very statistically relevant in studies). Males with longer ring fingers compared to index fingers are statistically nicer to women and get along better with them.  The inverse is also true: men with smaller index fingers compared to ring fingers are charming to ladies.

And size matters: the longer the ring finger or the shorter the index finger = the nicer 🙂

What about those men with index and ring fingers close in length?  Or how about those with short ring fingers?  Best to steer clear of those quarrelsome meanies as not the best boyfriend bet, if it’s not too late.  Just saying, studies show they can be more argumentative, and who wants that?

We all know that higher testosterone = more aggressive nature.  What we learned is that there is an external  testosterone reader on a male’s hand; look to the ring and index finger comparison for your communication cue to potential behavior.  “With this ring I do wed…” your longer ring finger!

But the caution from an Oxford University study suggests that these same charming longer fourth fingered people may be a little too charming, with a greater tendency to promiscuity… and there are those higher level male hormones talking.  It’s a man’s ‘job’ to replicate their DNA as much as possible, or so some men think.

Maybe it’s you with the elongated ring finger, or someone you love that may need fixing with relationship issues.  If so, any fixer-uppers are invited to explore www.YouSimplyBetter.com 🙂

Let me read your (male) palm… hmmm, I see my next BFF!