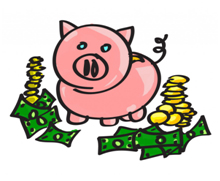 When I was growing up, my parents were very secretive about their finances.  It was an unspoken rule that it was not to be discussed how much they could afford, how much to spend on anything, or the overall budget in general.  I grew up not knowing anything about how to run money, without even a regular allowance to practice with.  Finally at 15 I decided to get a job and never looked back on running money.  I opened a checking account, bought a car, paid my own bills (decided I wanted contact lenses, picked a doctor, got myself to every appointment and paid for everything myself), sent myself on overseas vacations with my friends, etc.  Those were different times.

Then raising kids of my own, I was very active in teaching them how the world of money works.  From a young age they had an allowance that ran like a checking account: they did chores, were paid a weekly ‘salary’ with annual raises based on added responsibilities as they aged up, had the chance to work ‘overtime’ when saving up for something, and could advance against future earnings only up to 2 weeks out.  We had a whiteboard in the kitchen that we ran the debits and credits against, so very little real money actually changed hands until they needed to spend it.  They learned to save up for what they wanted beyond the basics.

A perennial question is whether parents should pay allowance for doing chores or instead give an allowance just for being alive, with no strings attached.  The latter thinking is that allowances and doing chores have different purposes – allowances are to teach children how to manage money; doing chores are to develop a sense of responsibility and a work ethic.  The former thinking believes that you need to tie chores to allowances so as not to raise entitled children; children need to learn that the only way to gain money is to earn it and the natural consequence of not working is no money.  Whatever your views on this debate, I will tell you that it worked well for me with my four children (now all adults with healthy money habits) was to tie allowances to chores, however only loosely monitoring the completion.

They also received a back-to-school allowance to shop for new clothes and sneakers.  Anything big that they wanted that they couldn’t save enough for, they learned to put on their birthday or Christmas list, thereby learning the value of patience and delayed gratification.   Or if that was simply too far away, I would cost share with them for the extra must-have item, but they needed to save up a full 50%.  Another tradition in our family was that on each child’s birthday the other siblings also received one smaller gift, so they wouldn’t resent the birthday sibling so much on their special day.  A full year is a long time to wait when you’re young.

As my children reached high school age, I took out a separate credit card with each one in both of our names, with a low limit, which I controlled and helped them to establish credit.  When they went to college, the card went with them, again with a low $3,000 limit, and they carried the card forward into adulthood, paying off the balance each month.  They grew up with a healthy respect for credit and knowledge of how to handle it and how to handle money in general.  And their high 800 credit rating for their young ages helped them to rent apartments and buy cars when they were just starting out.

COMMUNICATION TAKEAWAY:  So many college and beyond aged kids who are trying to function in the real world have no idea how to run money, and consequently get into trouble with money and bad credit.  Delayed gratification is not in their vocabulary, and credit cards are too easy to get, which lands them quickly into credit card trouble.   The money lessons need to start in early childhood (beginning in first grade with $.50 a week is a good start) and continue in escalation with more complex lessons for a dozen years, up to high school graduation.   A good basic financial foundation will serve them in good standing, as so many of adult problems revolve around money!