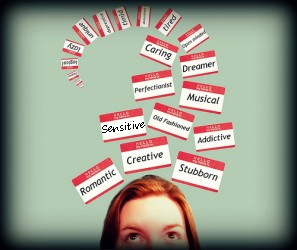 The old ditty “sticks and stones can break my bones, but names will never hurt me” was actually quite inaccurate — name-calling can run very deep and leave lifelong scars.  But when that name-calling and labeling comes at the hands of parents, even caring parents, the psychological damage can be crippling.

“You did WHAT?  How could you be so stupid?”

“Liar, you never tell the truth.”

Some labels are given fondly, even when they shouldn’t be.  My father-in-law loved his first granddaughter (my niece) dearly.  His affectionate name for her was “pest”.  He bestowed this on her when she was very young and addressed her by this label, instead of her name, throughout her early childhood.  While it was said in a playful manner, like a bad joke, still the subconscious repercussions of being considered a pest by your beloved grandfather has no positive attributes.  What child wants to be thought of as a pest, especially when they are too young to recognize that it was meant as an ‘endearment’?  Even an adult would have a hard time recognizing the affection in that nickname.

A label with a stigma attached – “dope,” “stupid,” “brat,” – can become a self-fulfilling prophecy to a young child who has heard it all his life.  I once worked with an associate who went by “Chub”.  Yes, he was a large man, but I’m guessing he had that nickname from childhood and it stuck.  While he stated being OK with it (in his 50s), it felt like an accommodation, an acceptance of just the way things were.

Even positive labels – “bright,” “good,” “talented,” “just like his dad” – while a point of pride, can add pressure to young child to live up to when used excessively.  My sister was always labeled “a good eater” by my mother, pretty much the only positive thing she ever heard growing up.  Guess who ended up with the weight problem throughout her high school years?

Labels prevent children from getting to know themselves for who they truly are and prevent parents from recognizing the child outside of the label they have assigned, the role for the child to play.

“Be a good girl for mommy while I’m away.”

“You’re such a smart little boy.”

Avoid labeling children; label the behavior instead of the person.  And the more descriptive and specific the comment is, the better for the child’s development.  By doing so the child knows specifically what action resulted in the label of ‘smart’.  It’s hard to continue to live up to parents expectations when you don’t really know what you did to earn the praise.

COMMUNICATION TAKEAWAY:  We think we know someone well, and so we give them a label, and in so doing we stereotype them behind a façade, without getting to the real person underneath the label, with their unique feelings and growing changing personalities.