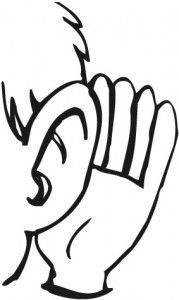 “Hey, are you listening to me?”

“Oh, I believe you heard me alright, but that doesn’t mean you were listening.”

So what does it mean to listen, to really listen – the top communication skill needed to build strong rapport – what really is the difference between simply hearing and really listening?

Some might tell you that ‘active listening’ involves repeating back what the other person said, in your own words, not just parroting back.  Or it involves asking open-ended questions that draws the other person’s conversation out further, proof positive that you were listening, or how could you ask such a thoughtful question?  Or listening involves sending specific body language signals of leaning in, direct eye contact, and a slight head tilt (favoring your better ear, to catch every bit of dialogue).  While these elements are part of conveying real listening, elements alone do not fully capture the concept, the essence, which is best defined as:

You’re not really listening unless you’re willing to be changed by what you’re hearing.

Beautifully simple, it involves having the right attitude, a mindset that says, “I’m flexible and open minded enough to learn something here that I may not have known or believed before; I’m willing to change my thinking.”

Why do we want to know how to listen ‘properly’?  Because listening is the single most important communication skill you have in your rapport toolbox, and most people don’t know how to use it properly and/or don’t use it enough.

There are many impediments to listening, mainly:

– We are too busy thinking about what we’re going to say when it’s our turn to speak, to focus on what the other person is saying.  So we may catch bits of it – “Wait, back up a bit, I missed something – what did you just say?”  Or more likely, it just goes right by, because truthfully we don’t care about the details that they’re going on and on and on about… [stage hog]

– We are too insecure, taking things personally (especially from certain people) instead of as the innocent comments they probably are, then quickly jump into defensive mode.  And you know that it’s impossible to listen when you are defensive; you’re too busy thinking about how to mount a good defense to possibly hear what the other person is saying. [defensive]

– We are easily distracted, there is just so much on our mind, and hey! what was that that just went by??  Lacking the bandwidth to process that the other person is saying, especially if it’s at all complicated, is an exercise in futility to listen, but we don’t want to be rude… [dazed and confused]

–  We are listen carefully, but not to add value to the exchange, but to trip the other person up when they err – “Hold on!  A minute ago you said (X), and now you’re saying (y), so which one is it?” This kind of listening is valueless and does nothing helpful. [gotcha!]

We all have 2 ears and 1 mouth for a reason – you’ve heard this maxim before.  Listen twice as much as you speak.  If you practice this faithfully, you will be loved, because so few do it; most instead talk way too much, especially about themselves.  Which is the subject for next time: how to communicate well with what comes out of our mouths.

So, can your listening skills be improved upon?  You’re welcome.