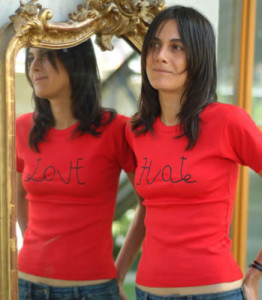 Watch out!  There’s a language loophole right in front of you, that you’re about to get tripped up by.  Where?  Whoa, I didn’t see it.  Yeah, ya gotta be looking for them to see them, because they look like all the other words.  Tricky business.

Language with others is used largely to influence.  We tell of our latest adventure, shopping find, brush with excitement – we want to impress.  Or our current tragedy, misfortune, loss of face – we want to elicit compassion, sympathy, comfort.

Influencing language is where language loopholes are best applied – to advantage (when carefully considered and thoughtfully chosen) or to detriment (when hurriedly applied with little thought).  When the latter happens, we wonder what went wrong – “was it something I said?” Umm, yeah!

You can think of language loopholes as deftly setting a verbal trap for others to fall into, as you smugly watch your bait being taken.  You are so clever with your words, you language ninja!

With yourself, you can use language loopholes in self-talk to get yourself to do something you really should but don’t want to do.  Yes, the concept can work cross purposes.

A great example of a language loophole is the word ‘don’t’.  When you use it alone, ‘don’t’, as an abstract word, can’t be pictured; since we think in pictures, using an unpicture-able word causes us to picture the next picture-able thing mentioned. The classic example is: Don’t think about a pink elephant, which causes you to think about exactly that – thanks, I’m now picturing a pink elephant.

“Don’t worry, we’ll take care of everything” – I wasn’t worried before, but now I’m worried.  Should I worry?  Well you’ve now put the idea to worry in my head!

“Don’t rush” and “There’s plenty of time, no rush” – these two sound like they’re saying the same thing, but are they really?  Consider which one you should be using for your purpose.

But ‘don’t’ in combination with ‘I’, as in “I don’t do donuts” when trying to stay on a diet, carries a very different power than the ‘don’t’ described above. The combination of “I don’t” associates personal identity with strong conviction that goes unchallenged.  It’s a positive way to use the power of a language loophole to convince yourself, to convince everyone.  I’m not the kind of person that does whatever.

If I want to stay on my diet and the hostess offers me dessert, if I respond with “Oh, I can’t”, or “I’m trying to be good and stay on my diet”, or “I really shouldn’t” – all of these responses may be met with some moderate argument: “Sure you can!”, “It’s a special occasion, so be good tomorrow”, “C’mon, just a little piece won’t hurt”…

However, politely saying “Thanks, but I don’t do dessert” stands firm and closes down the discussion, both in your mind and to the hostess.  You don’t even have to give a reason.  It just sounds like you’re the kind of person who stands by their convictions, so there’s no argument.  And it’s great for self-talk too, since telling yourself anything else is liable to break that diet.

Try it out, on yourself and with others, and you’ll feel the power of ‘I don’t do ____’.  But be careful, since language loopholes work both ways.  You may find the power working against what’s best for you.  “I don’t do exercise”, “I don’t do volunteering”, “I don’t do vegetables”.  Really?

Words can have many shades of meaning, depending on context.  The adjacent words can be very important, especially in writing, where you lack verbal tone to convey meaning. And language loopholes are everywhere, looking to trip you up, just when you thought it was safe to go into the water.