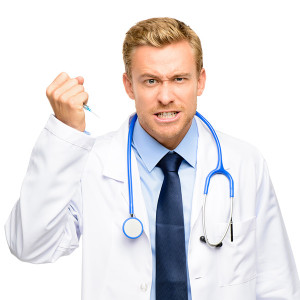 Doctors need to communicate well with patients – so how come so many of them are so bad at it?  I went to an allergist today to figure out why my eyes were itchy, my left ear was sore and the main reason for the visit: why my voice has been in and out for about a year now.  Sounds like an allergy to me, and what does this guy tell me? – voice abuse!   So I just have to wonder how such an apparently smart man (he did make it through medical school, so I have to assume he’s somewhat bright) could be so communication dumb!

His medical assessment to me, while perhaps accurate, was unhelpful in so many ways:

3)      Even if I was to blame unknowingly, no one wants to be made to feel guilty

Perhaps office docs are sick of dealing with sick people all day and are near burnout (but they are not sick of collecting a paycheck).  Perhaps they hear the same thing over and over again and are sick of repeating themselves (goes with the territory of being a specialist).  Perhaps they’ve forgotten that when people come in there is a medical problem and those people aren’t at their best (because they’re sick!).

Due to doctors’ superior educations and the all too real ‘white coat syndrome’, most people admit that they lie to doctors.  This can’t be helpful to anything.  The patient is trying to hide some perceived embarrassment, trying to avoid being lectured to like they were a child, about all the ‘shoulds’ they already know, or trying to make their behavior look better than it actually was.  And the doctors know that this lying takes place, or they should know because it’s well documented that it happens all the time.  So what does the doctor do to minimize the lying?  Absolutely nothing.

Doctor training should include how to properly communicate with patients.  Their valuable advice depends on having accurate information.  And the attitude of “if the patient lies, they just end up hurting themselves” doesn’t cut it when the doctor should be trained to ferret out the truth from reluctant patients.  They are being paid to be helpful, in every way possible.

As for me, an unembarrassed truth teller who has no fear of white jackets, I would just appreciate a dose of kindness with my expensive diagnosis of ruining my health by over talking – would it have killed him to have worded his thoughts a little less rudely?

COMMUNICATION TAKEAWAY:  Good communication is important in many areas, but between the doctor-patient relationship is it of utmost importance.  We don’t like people who treat adults like children, or with condescension – and without likability there is little trust.  Leaving the appointment without trust in what may have been an accurate diagnosis doesn’t exactly make you feel good!  It is also a prescription for non-compliance in the treatment, which is the opposite of what should happen.  In the doctor-patient relationship, the onus is completely on the doctor to create a trusting relationship, yet the importance of this part of their job on resulting treatment is not recognized by nearly enough doctors.