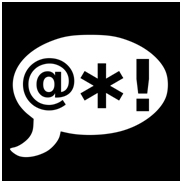 The late, great George Carlin was a comedian, a counter-culture hero, a master of the language of ordinary people.  In 1972 Carlin famously listed the 7 words you couldn’t say on censored TV.  Back then there were 400,000 English words available; today we have well over a million words to choose from.  Yet the 7 banned words Carlin listed 4+ decades ago are still pretty much the go to bad words of today.  Thank you, George, for starting the process of tearing down the uptightness around language.  Someone had to light the spark.

In Carlin’s day TV was censored, but then along came Cable, without the strict rules of the networks.  Suddenly primetime entertainment had the ability to cut loose and to be naughty. And, to no one’s surprise, it turned out that viewers like the racy stuff. Afterall, we’re kinda used to freedom of speech after 200 years of the constitution.  And we also like our independence, out from under the censor’s bleeping thumb. Cable forced the networks to relax their high standards in the competition for viewers.  Even radio talk shows got in on the verbal obscenity act, snubbing their noses at the invasion of privacy cries of unsuspecting listeners.

Since the days of our Puritan founders, society standards have declined, but we still like the idea of preserving our social values; hence the American uneasy relationship with profanity continues.

Wait!  Before going on, let’s make a distinction inside of bad language between cursing/swearing/blaspheming and toilet/bodily functions/sexuality terms.  Yeah, yeah, they can all be grouped as offensive language, but there is a difference.

Cursing has a Christian religious basis: thou shalt not break the 3rd commandment that came down from on high, taking the royal deity’s name “in vain” – more like using it in a mean tone.   If I say: “Jesus, that’s freaking fabulous” you’re not offended, actually you’re the opposite of offended.  But if I yell in anger, “Jesus, what’s wrong with you anyway?” of course you’re offended, with or without the swear.  It’s all about tone plus content.

Profanity depends on our adult cultural hang-up around sexuality.  Socially we carry old thought patterns that sex is dirty, nasty, don’t-ask/don’t-tell stuff; which cannot be easily changed.  This extends to the sex act, and all body parts attached to it, including what comes out of those body parts.  Completely natural, but warped to morph into unnaturally bad?  Damn those moral Puritans 🙂

Profanity, especially f*** in all its forms, is affronting in polite company because it is considered uncouth, base, uncivilized to swear.  Hearing a swear hurts our gentle sensibilities.  Hearing them also can corrupt our innocent children.  And offend our womenfolk too.  Except those profane women like my mother, who could swear down the saltiest sailor.

So what is it about “bad” words that can both attract and repel us?

Go to any comedy show if you don’t believe that profanity attracts and listen to what gets the biggest laughs.  Not just toilet jokes, but self-depreciating humor and reflections on the warped state of the world is somehow funnier when prefaced by several f***s thrown in the word mix.  Swearing adds nothing by way of content, but adds a boatload on enhancing delivery.

That comedy club laughter that you hear is an attraction and fascination for the taboo.  The nervousness that you feel is actually masking the guilt of enjoying the experience; luckily guilt is non-existent in the right environment, like when out for a night of entertainment.  Laugh freely at language you would blush to hear in any daytime context.

One thing is certain: profanity absolutely gets our attention.  When you really want to make a strong point, it can be easily strengthened, damn it!  Need it even stronger?  Drag it out – damn it to hell!  But don’t go overboard, or your brand will suffer.  A little profanity laced strategically in speech gets heads snapped to attention, especially when it’s infrequent.  Whoa, did you just say JC Superstar?

Cursing has a growing cultural acceptance.  The use of profanity in the office has been found to build co-worker relationships, to up the fun quotient, and to provide a channel to relieve stress. And in sub-cultures, it can be a necessity for group acceptance.  Every language has taboo words.

But what about the use of profanity in writing – does it have a role?  The short answer is no, there is no room for profanity in maintaining professionalism.  Now if you don’t care about your image… or, and there are some, if your brand purposefully includes swearing as part of your brand, and that works for you, then you have a reason.  But it’s still off-putting to many.  Refraining from swearing is never off-putting.

A 2011 study of 30,000 Facebook users found 47% have used profanity on their Walls.  Facebook is most appropriate for self-expression, with a FB personal page.  But today with Facebook moving more and more into the business space, the lines between personal branding and business branding are starting to blur.

Watch what you say.  Watch even closer what you write.