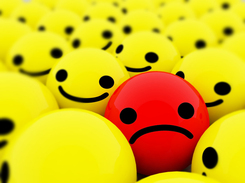 One summer when my children were young, we employed a young ‘nanny’ to come to our house and watch our children days while we were working.   During that time we needed to have the exterior trim on the house painted and this young lady volunteered her unemployed husband to do the job.  Knowing that they could use the money, I quickly agreed to give him the job – how hard could it be to paint trim?  Apparently harder than I realized, if you have the high meticulous standards as my able but time-strapped husband has (who was also paying for this lousy paint job).

When asked, I honestly pointed out to this young lady the parts of her husband’s work that were noticeably subpar (we still paid him for his time).  She became silently outraged at the criticism of her husband and defended him by quitting the next day, without notice or appearance.  So lesson learned – never employ, patronize or transact business with someone, friend or family, that you want to maintain an amicable relationship with afterwards.

When I was a financial advisor I had a prospect that had to move his portfolio quickly out of his firm that was being bought.  I wanted to do the right thing by him and plan his future.  But his friend quickly volunteered in to move the investments and manage the assets.  While the friend certainly wanted to help (and also wanted the sizeable account) what strain does it put on a friendship to ride the market fluctuations experienced over the last decade?  How do you tell him that you are unhappy when things aren’t going well with your portfolio?  Maybe no one else could do better, but how can you contain your resentment towards him for your loss?  What a strain on a friendship, when the friend was just trying to ‘help’.

That car that you bought from/sold to a friend that turned out to be a lemon – that will sour a relationship; apparently you were just supposed to have ESP and know that the car was a dud, but now the money is gone.   The cash loan, that borrow item, those one-sided favors – all harbingers of bad things to come.   We temper our good feelings of helpfulness with a silent prayer that everything will go expectedly well and count ourselves lucky when it does, lucky that we didn’t have to face the negative.

When things go well, there is a silent “whew!” of relief.  When things go bad, there is that sinking feeling and silent berating of “Why oh why did I ever use my best friend/my brother-in-law/ my etc. – now I can’t say anything without creating a war…” or at the very least resentment and bad feelings – towards the person for not performing and inwardly for being blind to the repercussions on the standing relationship.

This happens so often in business, when friends go into business together and either the friendship or the business, sometimes both, are ruined.  A local cupcake shop was started by two friends who went to high school together and drifted apart for several decades.  They reacquainted at a reunion and decided to start a business venture together, which was initially successful, but then fell apart due to differing visions.  They realized that they really didn’t know each other at all.

On some level we all know this to be valid, that we should put up a big caution flag when asked to help out and there’s a price tag attached.   But many of us can’t seem to discipline ourselves to firmly say no to do business with family and friends, on the principle that we have too much to lose if we say yes.

The problem is that we have a hard time holding those we like accountable for their behavior; it’s tough to tow the line with a dear friend, to play the mean card when it needs to be played, to be the boss (if it’s your money) when you are started out and continue to regard yourselves as equals.  There is simply too much ego involved with family and friends, which is not the case with non-friends, even if they turn out to be friends afterwards.

The biggest communication problem happens when clear expectations aren’t set up front, with clear consequences when expectations aren’t met.  And clear lines of responsibility for specific tasks, also with clear consequences if responsibilities fail.  Finally how a potential failure is evaluated.  It’s tough enough to hold our own hand to the fire – how about doing it to your friend or family member?

COMMUNICATION TAKEAWAY:    If you don’t have the personal policy of not using friends and family for business transactions, be prepared to a) write off/lose the investment/money paid entirely without regret, or b) lose/damage/resent the relationship if things turn negative in any way.  If you go into the deal knowing these two realities, you go in with your eyes open.  If you go in blind, protect yourself by setting clear expectations on both sides, setting accountability of responsibilities upfront, and establishing clear timelines on agreed upon consequences if not met.  While not binding or enforceable, at least upfront thinking and discussion paves the way for positive results.