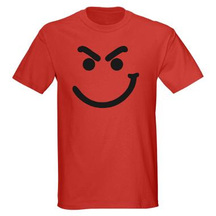 The movie “The Odd Life of Timothy Green” probably had the best line for “Have a nice day” – the mother says, “That puts too much pressure on him!” so the father relies, “Have the day that you will have!”  Isn’t that more like the truth?  Perhaps not as catchy rolling off the tongue, but entirely more realistic.

So why do we use these tired and worn verbal expressions?  There actually are several reasons.  One is that the brain likes patterns, so these very familiar expressions become very mentally comfortable.  Another reason is that we are creatures of habit – it’s just easy not to have to think much and to rely on a tried and true expression that is common.  Also verbal patterns work well from a fluency point of view – they are easy to understand.

Then why do we ‘hate’, which is probably too strong a word here, but roll-our-eyes-when-we-hear-them gets the concept across accurately, when yet another trite expression springs out of someone’s mouth?  That’s because we also like novelty, which is a survival mechanism.  Along with novelty comes new opportunities, which are needed to thrive and get ahead.  So when a new expression comes along, we are enamored of it long enough for it to be overused and then we get sick of it along with the rest.

When our communication skills are so lacking that we rely too heavily on clichés to express ourselves, our verbal creativity is sorely lacking.  And now we have text clichés, verbal shortcuts, but clichés nonetheless:  LOL, TTFN, TMI, IMHO, etc.

While shortcut communication may be expedient, how much communicating is really going on?  The burden of clichés is that all sincerity is stripped away in favor of something that used to be clever.  It’s, excuse the cliché, like beating a dead horse; it just won’t come back to life and useless to try. Perhaps silence is better.

COMMUNICATION TAKEAWAY:  In this hurry up world, we are usually rushing to save time, and so our communication gets clipped, shortened, streamlined to the point of cliché.  At what point have we ceased communicating and instead simply move from one trite expression to another in place of having original thoughts and real conversations?   In polite society, uttering the cliché “Have a nice day” instead of saying nothing, which appears uncaring, is required.  And the correct response is of course, “You too.”  Argggggh.

QUESTION:      What different expression do you use instead of “Have a nice/wonderful/great day!” to sincerely wish someone well?