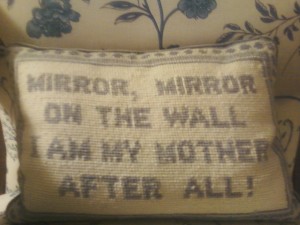 Parents play a very special role in not only teaching good, effective, and ultimately successful communication skills, but they also must model the same for the lessons to become internalized.  We think of communication, which we know is not formally taught, as somehow gained through osmosis.  There are no school lessons in how to communicate, other than basic instruction on the technical processes of reading and writing.  But the skill of turning words and sounds into influential interactions with other human beings can be taught, with the right teachers.

The problem most parents face is that they have never been formally taught themselves and quickly find themselves reverting to simply what they know.

“I sound just like my mother, and I never wanted to be that way.”

“I hear my father’s words coming out of my mouth; somehow I turned into him.”

Not many people have had models of effective communication in their home environments.  Most lack the good fortune of having learned to communicate well from early childhood.  Well-intentioned parents learned inadequate ways of relating from their own parents, so we are all largely victims of victims.

Parents who want their children to have a different experience than they had with their parents need to acquire communication skills, which they can then pass on to their own children.  This is easier said than done since adult habits are deeply ingrained and hard to change.  Adult patterns of communication were created during the young impressionable years and carried forth as part of personality.  The old tapes that run through our heads become internalized as a little voice that never stops talking.  Many people mistakenly believe that, like the color of their eyes, their communicating style is a ‘given’ in their life; there’s nothing they can do about it.

Patterns that were acquired in childhood can be replaced by more effective responses.  It’s not easy to change years of habit and the new ways of doing things often feels unnatural and awkward; the temptation becomes to quickly abandon the effort as too hard to change.  But when an awareness of how dysfunctional some typical responses can be, there is good motivation to change and learn better ways to communicate effectively without damage.

The next generation of good communicators depends on their parents trying to learn these valuable skills.

COMMUNICATION TAKE AWAY:   Change is inevitable.  We change, the people we know change, the world changes around us.  Even when we think we aren’t changing and cling to the old ways, things are different because in the time since yesterday and today both we and the environment have changed.  So since you inevitably will be changing the way you relate, isn’t it better to manage the change with skills than to just let inevitable life changes happen by default?  By choosing to learn new skills to implement inevitable change you can guide the change towards desired positive results.