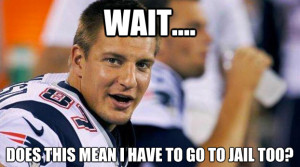 Reading the sports headlines about Aaron Hernandez and what went wrong in that tragic situation is so apropos for this blog.  What a tragedy, as this skillful professional athlete, has now been implicated in 3 murders.  Although not proven guilty, surely he is recognized as guilty of making poor decisions.  The tragedy is not just in throwing away a potentially brilliant sports career, but more that his poor decisions negatively impacted several other lives, who also had great potential to share with the world, which was wrongly taken from them.

The spotlight shines on Aaron Hernandez because he is famous, but actually he is just is another classic example of an adolescent brain, still not fully formed, making major decisions without the benefit of a completely developed prefrontal cortex.  So how is a situation like what happened with Hernandez identified, and importantly, how is it averted before it gets to the point of tragedy occurring?

We now know that there were early warning signs that Hernandez‘s character was pointed out as suspect.  His pre-screening personality test for the NFL described him as enjoying “living on the edge of acceptable behavior”.  While he showed strengths in motivation for career success, highly coachable, dedication, and mental quickness, his low score in ‘social maturity’ (he received a 1 on this category, out of a possible 10) should have been a huge red flag.  Basically that indicated that he was a young ‘frat boy’ type, that would let his impulsiveness (low social maturity) dictate his behavior.

Under ‘weaknesses’ the report comment was that Hernandez might get along well with most of his teammates but “will find very little time to help them” – an anticipated lack of cooperation, and “prone to party too much, and doing questionable things that could be seen as a problem for him and his team.”  Warnings aside, the New England Patriots still signed him late in the draft.  They did this for business reasons (salary structure option differences with the later round draft choices) without regard to assisting with the warning signs that was open knowledge.   He was in the throes of adolescence, which needed to be balanced with his prime years of physical ability.  In his case adolescence won, and Hernandez (and the Patriots) ultimately lost.

This disregard for a hugely problematic area, despite his physical attributes, allowed Hernandez to also ignore those areas as problematic and continue with business as usual.  The seal of approval that the professional football contract provided reinforced to him that he was doing everything right and was not really in any trouble with his behavior.  Adolescent bad boys look to be let off the hook and have a hard time holding themselves accountable.  When society rewards that behavior, it becomes all the more problematic and harder to rein in.

So why does this happen, over and over again, with many others who don’t make the news?  And what can be done to change it?  Let’s start with the first question first.  This happens in our society for a number of reasons. One is that we regard a 23-year-old as a full adult, with the only responsibility for his behavior as his own.  Society holds him to the adult standard, regardless of social maturity development.  (“He should know better ! He’s not a kid.”) He also, at 23, considers himself to be an adult, without being aware that his brain is actually still an adolescent’s, without the true capacity for fully rational thinking.  This does not completely develop in some people until as late as the late 20s or early 30s.  This makes adolescents impulsive and prone to irrational behavior that most adults wonder, “what were you thinking?”  The answer is they weren’t fully thinking at all, but not necessarily due to mental laziness, rather due to literally the incapacity do so.  Yet, at 23, you truly live with the adult consequences of your behavior.

COMMUNICATION TAKEAWAY:  What can be done to change things?  What could have been done in the Aaron Hernandez case?  With any developing adolescent, a strong role model that cares about the adolescent’s development is key to helping them through these hard years of being an adult, yet lacking adult rational thinking skills.  When this influential older adult understands that this stage extends beyond the teenage years, it can be a salvation to a particularly volatile personality. Having this relationship in place from a young age, well before it is needed, is a gift that every young adult should cherish, if they’re lucky enough to have it.